I noticed a few people (myself included) were running into issues trying to create seamless audio loops when exporting to the recommended IMA ADPCM (WAV) format.

"Because ADPCM uses sample blocks that are aligned one after the other, a wave compressed with ADPCM may have an unfinished, partial block at its end. The ADPCM decoder generates silence for the remainder of this partial block, which keeps the wave from looping seamlessly.”

I was noticing an unexpected pop when my audio track looped and had mistakenly assumed it was a hardware limitation of the Playdate, but it turns out it's part of the ADPCM spec.

I noticed this with both Audacity (3.1.3) and ffmpeg exports on Windows. Apparently this doesn't happen using WavePad to export but I didn't confirm.

But I think the docs would benefit from a short note about this in the section where Audacity and ffmpeg are mentioned.

Interested if you have different results with the adpcm-xq encoder. 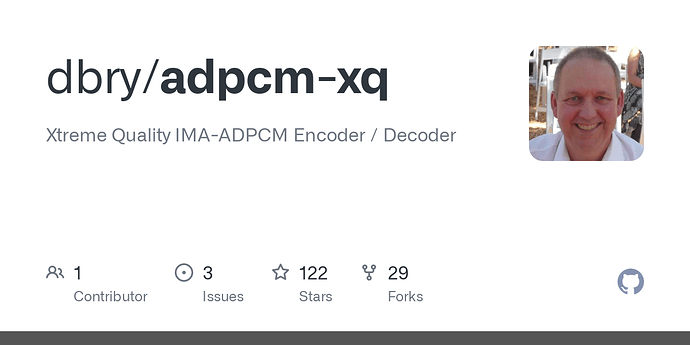 I've been using a small script wrapped in an app (using Platypus) to convert my audio to ADPCM. Today I updated that from using ffmpeg to using adpcm-xq (thanks to @mandra via @neven for the tip!) Results are higher quality, compatible ADPCM audio files albeit with slightly longer conversion time. usage run app and select files to process or drag and drop files onto the app icon output folder ADPCM next to source files 22050 Hz stereo options hold Alt: 44100 Hz stereo hold Shift: lar…

Interesting, I'll give this a shot. So far I've noticed the results to be different per audio file I'm encoding (which makes sense but just makes troubleshooting slightly trickier).

Alright, I gave ADPCM-XQ a quick test and it does fare better, but I still notice some silence at the end compared to the source file.

The top row is the original (mp3 in this case), middle row is what Audacity exports using IMA ADPCM, and the bottom row is the XQ conversion from Github (with default flags). 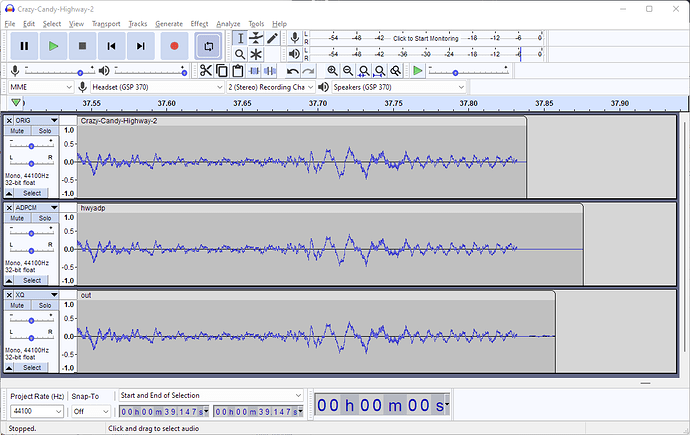 It does seem to vary heavily based on the input audio file though, so perhaps most people won't run into this issue.

XQ probably does provide the best quality though, at least from the readme it sounds like a great conversion tool.

Yeah, they will be totally different. This does an optimised encoding by looking ahead.

We've used it for music in Sparrow Solitaire, and even when we loop we don't notice the small silence.

Thanks for doing this comparison.

I use Fission audio editor on macOS and one of the great things about that is that it edits by block. But, it's still not possible to remove all silence as it's unlikely the music/loop will align exactly on block boundaries. Would love to find out a way to do this!

Also, I wonder if the audio engine on Playdate removes the silence on looping/playback?

That could be the best way to negate all this.

It might be tricky to remove at the SDK level, eg if someone intentionally wanted silence at the end of a track (I guess could pass a flag?), but at least raising awareness that ADPCM works on a block-based system and can lead to unexpected silence would be nice. Even though it's not Panic's responsibility since it's not like they invented ADPCM, but still.