I've just finished work on something in Pulp: a psychological horror game called Penrose that's dropping 10/1/22! Here's the itch page, to give you an idea of the game's vibes: Penrose (Playdate) by whyfie Some screenshots, too: 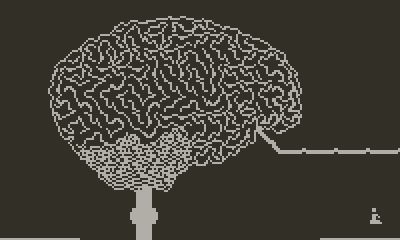 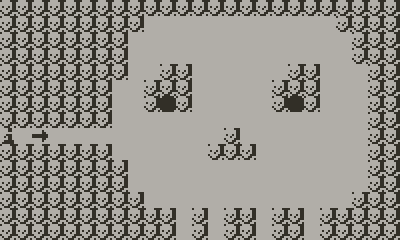 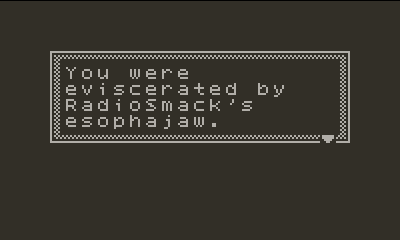 The game runs great on my browser, but my computer can't handle the Playdate SDK, and I won't get my Playdate for a while since I'm in Pre-order Group 5 (sadface), so I could really use a bug tester to run this on actual hardware and/or the Playdate Simulator.

The testing would be super simple, just running through the game normally and checking for bugs, glitches, and crashes. The ZIP file is below if anyone wants to take this on. Thanks so much in advance!!

Thank you for sharing this. The atmosphere in Penrose was dark and oppressive (in a good way!). The story felt very personal.

I played through it on a Playdate. I found a couple of minor issues, and one major crash.

An "A" button icon flashes in the lower right corner of the screen for a while once you start. I assume that's only supposed to show on the title screen, to tell you what to press to start the game, but it continues on in the bedroom and sometimes the hallway. It also reappears in the bedroom if you return there later.

In the first internal room of the mall, if you exit at the very bottom left corner, you end up on the next screen in a wall. Not a bid deal since you can move up to get out of, but you can't just move straight left.

A bigger issue is near the end. After going to the mall, catacombs, playground, etc., and speaking to the giant, you select that you want to go and appear in a straight hallway running left to right. Going to the very right end causes the Playdate to crash and reset.

Finally, an optional suggestion. Many of the choices end the game, which I think adds to their import and the emotional weight of the story. But you might want to add another dialog step, like a "are you sure," at least to the ones at the end, since it's pretty easy to select one unintentionally (I did that at the giant at the end when trying to confirm the crash and had to restart from the beginning). But that's a design choice, obviously.

Edit: on looking at the game in Pulp, looks like the crashing issue is the final tile that should invoke the end. But this works fine in the Pulp browser.

For some reason invoking "fin" on an item causes the Playdate to crash, but Pulp in the browser is fine. You can change it to a sprite tile and use "interact" instead, that works fine on actual hardware. Not sure if this is a Playdate bug or what, but the browser version of Pulp should probably do the same thing as the hardware.

First: Thank you so, so much. This really means a lot to me, and your notes are super helpful!

I changed the flashing "A" button to instead be a few static tiles that say "Press A." That way I can just avoid any weird coding errors altogether.

I knew about that wall clip in the mall, but unfortunately I think I'm going to have to leave it because if I don't have a wall there, the player can walk into Not Tropic on the room below. So I think having that single pixel of a wall in the brain room is my best bet. But thank you for pointing that out!

I definitely hear what you're saying with giving the player one last "are you sure" moment at the end. I think I'm going to keep it as it is, because I do want those final choices to have maximum weight, as you mentioned. But it's definitely an important thing to keep in mind, and I appreciate it!

Thank you for the tip on how to fix the ending! I got rid of the item that calls for fin and instead made that tile a fin exit using the same text as the original item. I'm thinking/hoping that should fix the issue.

I've updated the file in my first post to reflect all of these changes, and I've also attached it below. Thank you so much again for running this through and doing such thorough bug testing! This helped so much, and your feedback on the story/experience really means a lot to me too. I appreciate you!

Glad I could be of help, I enjoyed playing through it!

Just tested your updated version: the ending works properly on the Playdate hardware now, so you are good.

P.S., Perhaps you know this already, but I saw you named the updated one Penrose 2, but you can add proper version info. Unfortunately not through Pulp's UI, but once you have exported the zip, you can manually edit the pdxinfo file within and add and "version=N" and "buildNumber=N" lines.

I'm so glad to hear that! And I didn't know that about manually editing the version info, thank you! I'll make sure this version you helped me with is called "Penrose" on launch, then I can edit the pdxinfo later if any updates are needed.

Again: thank you so much. This is the first game I've ever made, so your help is very much appreciated!