Hey all! I've been creating a game for a couple of days now just kind of brainstorming fun ways to implement a battle system. I've settled on a guitar hero type screen where the bullets rain down on the player in a specific sequence. The goal is to dodge the sprites as they get to the player and eventually exhaust the npcs. I have already made the Battle room and a way for the player to be teleported to it.
My first attempt I wasn't sure how to write the pattern for the bullets to move down the screen in a straight line in the code. (About 9 tiles travel distance) so I created enough sprites for each lane. Animated and moved placement of the sprites so the transition is looks tight.
I guess my question is is there a better way to trigger my animations for each lane in the code without interacting with the sprites? Or should I keep going the way I am with dozens of sprite frames specifically placed in a order get the pattern effect I want. Oh I should mention I'd like to do this on a timer . Starting once the menu is closed. 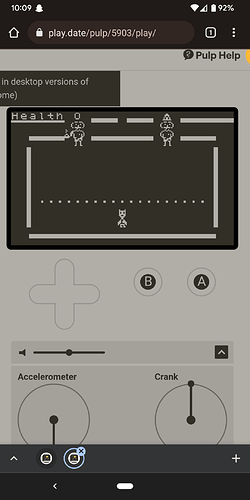 Thanks for any feedback. I've loved using pulp so far. It been a dream come true!

I implemented a similar approach for an endless runner style game. Not the prettiest code, but seemed to be the only solution. Will be watching this thread for any other recommendations.

So I did the math. If I shrink down to 10 playable lanes and about a minute of fight time at 4fps. I'm looking at about 21600 individual animation frames if I let it play through the animation. Might be a little in over my head with that route if my math is correct.

You might have to implement a few random elements. Randomize the bullet spawn location/time, then have the bullets control their own progress by iterating frames/swapping locations as they move toward the player. I did this for enemies in my endless runner above. It's a bit convoluted, but works.

In the room script, I have a spawn threshold variable that is set to a random number between two fixed values. The fixed min/max control how frequently enemy sprites spawn:
fingerSpawnThreshold = random 120,170

I then have a counter that increments with each iteration of the main game loop. When the counter trips the threshold, I spawn a new enemy at a random location, then reset the threshold to a new value and start the counter back at 0.

In your particular case, you could either track independent thresholds for each bullet column, or select a random x location for each spawned bullet. Going the latter route would significantly decrease the amount of code you'd have to write.

To recap, the simplest route I'd suggest would be:

Thank you for your advice. I'm currently on holiday but will try this when I get a chance!