I meant to write about this since yesterday, so it is somewhat of a coincidence, that another user just posted a (way more beautiful looking) game idea that involves a light circle.
Anyways here we go:
I am not a coder and much less a game designer. I did however preorder the Playdate and have been playing around with Pulp in the last few days.
After clicking around a bit, I toyed around with the idea for a puzzle platformer:
The protagonist is waking up in the middle of the night, because they REALLY need to go to the bathroom. Unfortunately the building is fairly big and completely dark.
So they have to make it from their bedroom to the bathroom while barely seeing anything. Luckily they will find items such as matches or a flashlight, that will help them find their way around.

So, I put together an example room to test game elements. So far, it contains interconnected doors, ropes, the player can climb, deadly spikes etc...
Jumping is not possible, the player can fall off cliffs though. They do not die, no matter how deep the fall. They do die if they fall into spikes, however.
The player finds matches to light up the surroundings, they are consumables however, and only stay on for 3 seconds. A flashlight can be found too, which lights up indefinitely, but only a few tiles in front of the player. In a final game I would want the flashlight to be crankpowered: light up more the faster the crank is turned. In the emulator the crank is a little awkward, so for now it's just constant light.
(I did hide a box in the game, however, that: increase the light circle based on how fast you crank.
(when I say light circle btw, I mean "light rectangle". It is done using fills.))

The thing is, I go back and forth, whether what I put together so far, can be turned into an enjoyable game, or whether I should rather abandon the whole light thing, and maybe use parts of the game for a regular platformer or so.
Part of the reason it is so hard for me to judge , is that I obviously know the whole example room by heart, and can navigate it blindly. So, not much exploring and figuring out going on.
So, I'm uploading what I have, maybe someone feels like spending 2 minutes and having a go at it

First some screenshots: (no idea how to make these gifs) 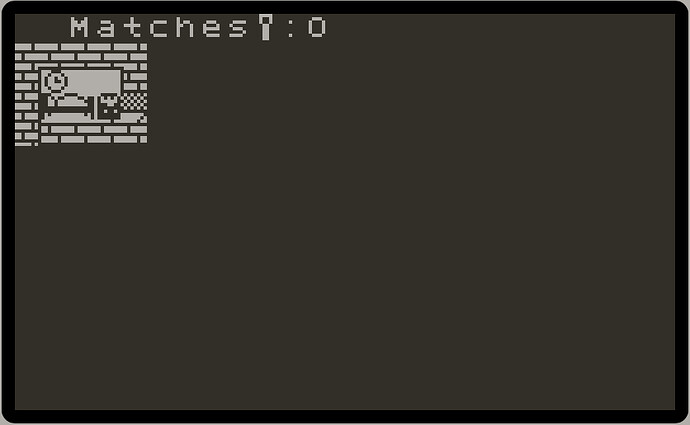 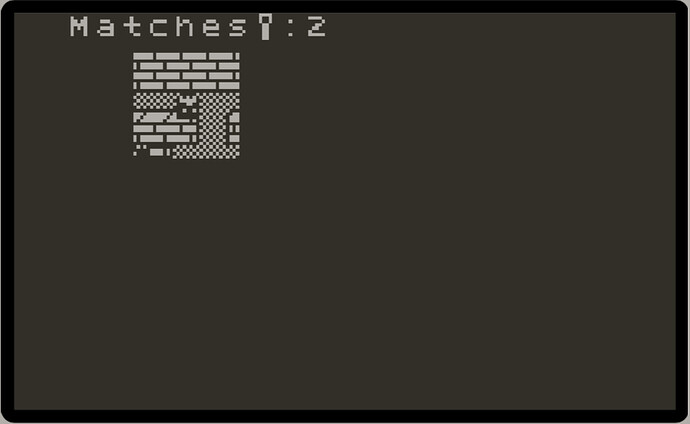 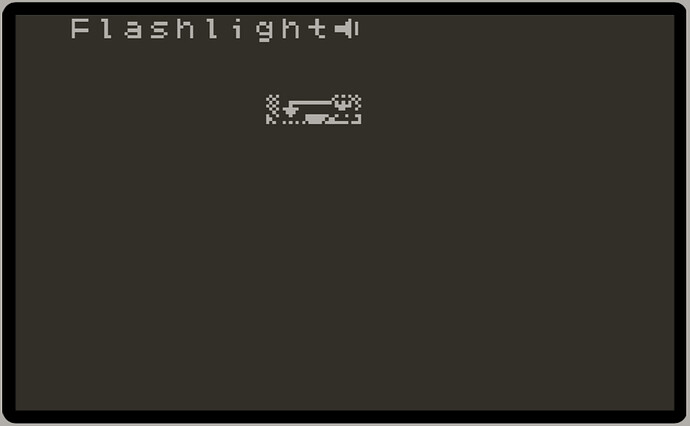 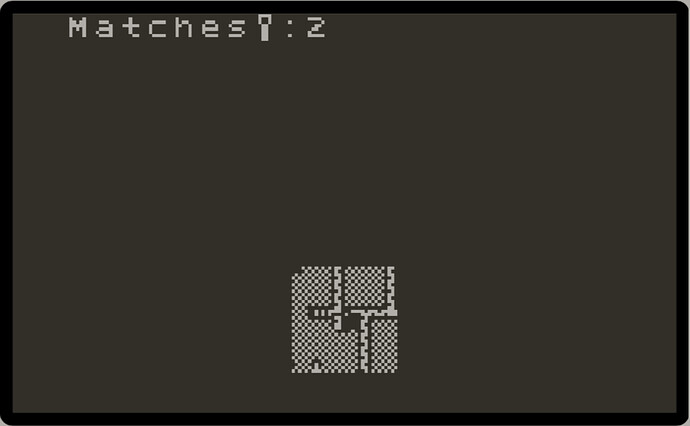 Not everything is explained in the game yet, so here are some instructions:
Movement is left/right, unless there are ladders/ropes, then up/down is possible too.
A match can be lit with A, and goes off automatically after 3 seconds.
The flashlight can be turned on/off with A.
If both matches and the flashlight are equipped, one can switch between them, using B.
Items cannot be switched, while a match is burning or the flashlight is on.
To go through a door, stand in front of it (on the door tile) and press up.
I can only recommend to turn on the sound. Especially since there is so much darkness in the game.
If you make it to the bathroom, there is a brief peeing animation

Well this is quite funny!

I have to say you have much more of a game than I do at the moment!
You have music AND your card art is on point! 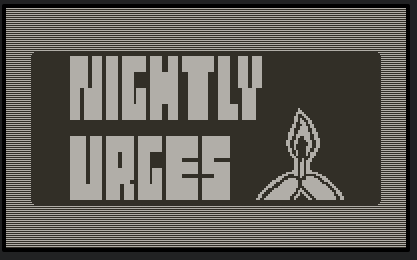 I played the game about 4 times just now.
I love that I can change between items and move around a side scrolling maze.

I think the two issues I had which I would give feedback on are...

Great work all around! I could see myself playing though more levels of this.

Also, perhaps if you have the player in a fully lit room to move around in first,
And in that room, teach them that they can fall, and climb ropes.

Only then will you layer the darkness gameplay on top of that.

Thank you for the kind words and suggestions.
What you do already have in Light Game is gorgeous. When I saw it I was actually intimidated and hesitated to share my file at all

re: 1. I will try an all white background tomorrow, (or alternatively make the ropes more visible). I had hoped to achieve some semi-darkness through the checkered background, but to be honest it made the 8x8 pixel art in general more difficult.

re 2. I get it and have been struggling with this. I had started off with a 3x3 light zone, but figured it often gives enough context, that matches/flashlight did not add much benefit. Maybe it's just a matter of level design. I will play around with this. Maybe just a few pixels extra, will make enough of a difference...

re 3. I had thought about several very short tutorial levels to introduce the game elements one by one. But I actually prefer the idea of having a lit up room first. Thank you!

this is really cool - i like the concept and the implementation

as others suggested, i think having some fixes in place for readability and something of a mechanics tutorial would help a lot, of course.

i wonder how you'll manage to create new puzzles and traps for more levels? would you create new types of hazards, or perhaps funny things to see in the background? would you hardcode the levels, or make them dynamic at runtime (with the possibility of unsolvable levels or perhaps unintentionally easy levels)?

i've recently been working on a game myself where i create randomized paths through a single room. i've been spamming it in these forums enough already, so i won't try posting the code here again - but if you're interested is seeing my work-in-progress and perhaps stealing some ideas on random path generation please feel free, it's called Loot'n'Scoot and i think you'll find it on a search here pretty easily.

random anecdote from college: an old friend of mine had a roommate in college, they shared a 4 bedroom apartment with 2 others. this friend had a famously odd boyfriend. the boyfriend would get drunk then, in the middle of the night, need to relieve himself. thinking he was elsewhere he would stumble across the room, open the closet door, and pee all over his girlfriends clothes before stumbling back to bed.

i'm not sure you'd WANT to do anything with that story (if you do, please feel free), but i hope in telling it i'll serve as something of a muse for you. what might your game's character do if he can't find the toilet in time? what might the consequences be? would it always equate to "you died, try again"? or would it perhaps mean, "you watered the plants and your orchids have died"? maybe even, "disgusting, your girlfriend forced you to move out"?