How to use the UI characters from the font?

I'm building a menu system where some items in the menu will open another window and others won't. some might toggle the item on the list, or disable it, etc.

I'd like to use the < and > like characters from the UI section of the font. are these available for use in text entry? perhaps there is a character code i'd need to use?

They should work just fine, which characters are you trying to use in particular?

The code above works for me, note that you have to escape double quote marks with a backslash otherwise it would end the string.

thanks for the response

i'm looking at these UI characters: 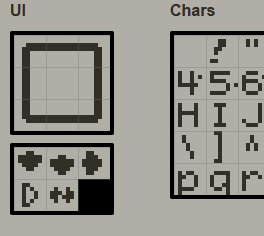 Part of my current experiment includes some fancier-than-expected menus. for example, menus with items that:

i haven't experimented with tiles for this yet, but it feels wonky to consider drawing a tile on to of the native menu implementation. i doubt it would work?

If there might be an escape code to drop these UI widget characters into a normal text string, that would work best for me.

Those UI tiles are kind of off in their own tile pool so they can’t be embedded in text. One option is to export the font from Font mode and import the png that produces as regular tiles in Room mode. Then you can embed them in a string as you would other tiles.

Maybe this might save you some work though: menu calls can be nested. Background menus already maintain their cursor position and change its icon to represent its background position in the menu stack.

... One option is to export the font from Font mode and import the png that produces as regular tiles in Room mode. Then you can embed them in a string as you would other tiles.

wait - i had no idea i could embed a tile in a string? do I just put the tilename in {'s like another variable?

Maybe this might save you some work though: menu calls can be nested. Background menus already maintain their cursor position and change its icon to represent its background position in the menu stack.

huge facepalm here! i thought i tried this and found it wouldn't work!! DOH!
ok, this might save me a LOT of time. thanks!

is there any way to change the contents of the menu at runtime though? my current menu structure includes something like this:

With the above I can make it look like a menu stays open no matter how many things you click on; and i can modify the text within the menu. so toggling between auto and manual mode looks like it happens while the menu is still open...

for the relatively simple behavior above this might not be a big deal, but i plan to include menus in which a user can define a script of sorts, like this:

Then, as the user scrolls through that list they can click any "no operation" NOP entry to open a submenu. from the submenu they will see a list of all the "instructions" they have access to. Picking one of those instructions will replace the original NOP. So after some interaction the above might look like:

Embedding a tile in a string is documented under say but will be moving to a separate "String formatting” section in the next push. It looks like this:

As for changing menu options that are already on screen, I’m pretty sure that’s not possible. You can control which options display by nesting them inside if blocks inside the menu block, eg.

Edit: Here’s that link to the new String formatting section of the docs.