It would be cool when drawing to be able to draw over a multiple-tile canvas, and have those tiles appear in the tile list as separate tiles (or even as a group that you could paste).

This would allow users to better draw elements of larger scenes rather than doing it one tile at a time.

I imagine it as being able to set a WxH up to say 4x4 in the tile edit box, and then be able to draw in that area, with the tile boundaries shown. I guess it becomes a problem with identifying which tiles are a part of it and how to identify them… I guess the easiest way would be to keep them as a group and give that group a name like a tile name.

This! It’s fairly tedious to try and coordinate multiple tiles to line up correctly.

I guess just being able to zoom in and draw on the room view would be good. Then any new tiles could be automatically named and you could copy and paste them.

3rded for this! Say i’ve got a tree in 9 tiles, there’s no way to either select all of those tiles, group them or drop them back in the world as a single thing. This would be a massive quality of life and workflow improvement! It’s difficult enough telling what sprite is what from the tile menu 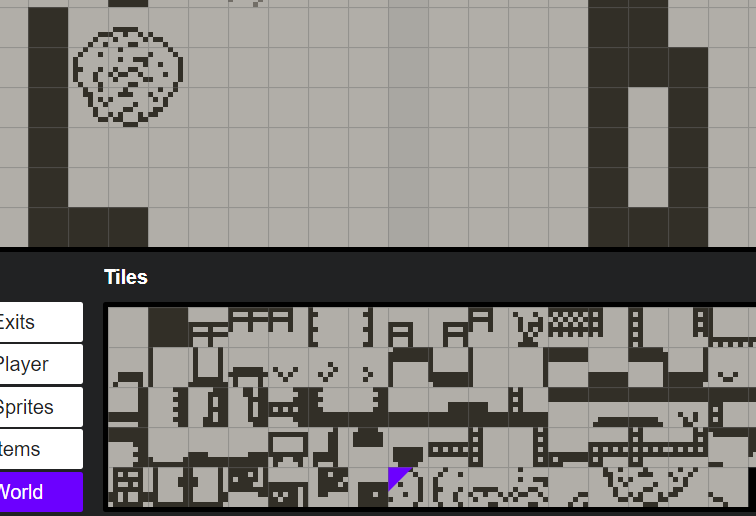 This doesn’t help with placement, but you can achieve the “draw across tiles” trick you mentioned by using an external image editor to create a sprite sheet. You just save it as a PNG file with certain naming conventions and import it into Pulp. See Neven’s comment here for specific instructions.

Adding to this, it would be great to at least be able to have labelled “groups” in the tile list below, just to help organise them

We need tile catagorizing! It would be great for Pulp since it would keep development simple and clean for everyone!

I am guessing nearly every Pulp developer had the issue of a messy tile grid at least once.

I just posted a method that may help with this. Would love to see multi-tile in pulp but this is a workaround