Yesterday I posted Tim Tooth on itch (for free). This is based on a mini-game of the same name that I liked in the adventure/exploration game Tux and Fanny from Ghost Time Games. Tim Tooth is a puzzle game where you brush away squares with a toothbrush, blocks fall into the opened space, and chain reactions occur.

One challenge I had when developing this version was an early realization that I'd have trouble seeing the game board on an actual Playdate. The game is played on a 10x18 grid, which is tall and narrow. That forces square tiles to be at most 13x13! Too small. 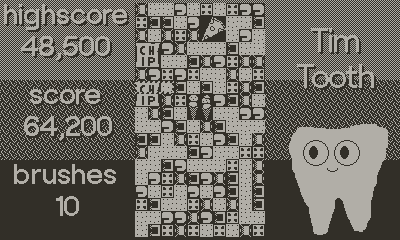 An alternative would be to flip the Playdate on its side, and then you could have square tiles being 22x22, which is a much more legible size! (I used 20x20 to have room for some info) 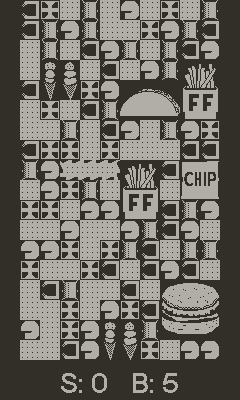 In the end I couldn't decide on how to proceed, so I just did both things, and put a switch in the menu to choose between the two orientations (choice is preserved when relaunching the game). The usual landscape mode is nice because you can see the picture of Tim Tooth and see what the current high score is. But the portrait mode is nice because you can more easily see the game board.

Unfortunately this complicated development. I drew all of the pieces for the gameboard twice: once using the 13 width baseline, once using the 20 width baseline. The game maintains two separate tile maps for the board, but only draws the appropriate one for the chosen orientation. This would've all been easier to do if the Playdate SDK supported 90° rotation of tile maps, but it doesn't! I also rotated the individual pieces of my 20x20 spritesheets manually. All directional inputs have a different effect depending on the chosen orientation.

I first started on this back in April, and my Playdate only came last week. So I was also guessing about which was the correct direction I should be rotating (clockwise or counterclockwise), and when I received it I realized I preferred the opposite orientation (Which I discovered by using the "Upside Down" accessibility option). But I swapped it all, made some sounds (which was another huge improvement), and here it is: video on twitter.