Sorry if this is a stupid question.

Absolutely — with the Exits layer selected, click the exit, and then in the Exit palette on the right, click the tile where you want the player to appear in the destination room.

I think the different exit types could be better explained in the docs. I think you’re talking about edge exits which span an entire side of a room while Dan is talking about connection exits which are a single tile and target a specific tile in another room.

And while they are called edge exits they don’t need to be used right up against the edge of a room. When the player passes through one they should maintain the same position relative to the exit (for a vertical edge exit that would be the same row, for a horizontal exit the same column).

Thanks Dan. This has helped me better understand how to control the exits in my game!

Thanks Shaun. This has helped me better understand which exits I should be using for which type of connection! 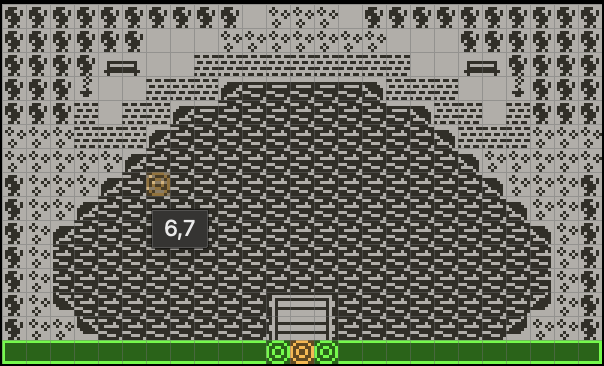 So that's probably the reciprocal exit of an edge exit created in another room. (Either that or it somehow got orphaned if its pair was deleted or had its type changed.) Does the room “below” that one have an edge exit at the top? Did it at some point?

Also, I need a better term than “reciprocal exit”, what a mouthful/keyboardful!

Appreciate this input @shaun, came here literally for the same reason and the fact that you have to click it in the tiny room on the right definitely could use an update in the documentation.

Appreciate your clarity though, working great for me now!

I totally could not figure this out. The side palette that shows the previews "feels" like a view only. I get the complexity it affords by not forcing 2 tiles to be 2-way connected, but at a minimum a highlight on the "coming from" tile would help a bit. (maybe I could even drag it!)