A month after release: Sales of a $1 playdate game! 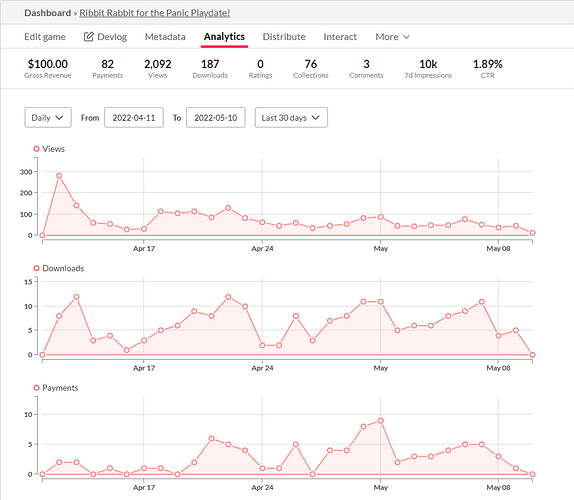 Hi all! I'm the developer of Ribbit Rabbit, a puzzle game for the Playdate built entirely in Pulp.

I released my game 30 days ago and wanted to share my experience with launching my game on itch.io to hopefully inspire/inform others who are considering launching their own title on the store.

Launching the game on itch.io was a relatively painless experience. The only part that gave me any pause was the 'tax interview' that I needed to complete in order to use itch's built-in payment gateways, but after using google to clarify some language (the code you need in the UK is just your National Insurance number, not that it tells you that) I had no problems and was able to start selling immediately.

I decided to sell Ribbit Rabbit for just $1, as my aim with this game was just to offset the cost of the console itself and without owning the console I was not sure what level of quality the game was at. Itch allows you to set the price of the game as 'X or greater' so I set it as $1 or more, and I have had a few kind souls who have chosen to pay more, which is very kind and very much appreciated.

I was very lucky in that by releasing early I was able to be mentioned on the Destructoid article about sideloading content onto your playdate, which has helped increase my sales. I was also mentioned on a website called hobbyconsolas.com which I am not familiar with, but it still felt good!

Most of my traffic comes from itch itself, but I also get some from this forum, the playdate subreddit, and the playdate wiki. I actually noticed at one point that I was getting traffic from itch's 'top sellers' section, where I was listed in 31st place! Although, as I had sold my highest number of games that day, at 8, I think it says more about itch then myself I'm afraid.

I decided to make this post quite early on after posting my game, after seeing a few posts asking about selling their game. I wanted to wait until I had 30 days of data and was very pleased when I saw that my sales ended at exactly $100!

So yes, my little pulp game has made me $100 in a month. Not quite fully offset the price of the console yet, but it's certainly made a dent! Please take a look at my stats and if you have any questions please ask away and if I can answer them (without violating data protection or anything lol) I will.

This is super helpful! I'm planning on releasing my game this weekend on itch.io. Thank you for the insight. It's helps me manage my expectations!

I released a Gameboy game on itch.io a year ago and I loved the experience. I completely agree, the site is easy to use and really easy for users to navigate-which is super important!

Thanks again for sharing!

Oh cool, I also released a gameboy game on itch! Mine is Trickle Greenweed: Mermaid Attorney in Christmas Catastrophe, what's yours?

I'm hoping to port my gameboy game to the playdate as well.

Ha! Awesome! Mine doesn't have a title as long as your's but it's close: Life In The Analog Age: Rainy Day by Gabe Swarr

It's really awesome, and has seemingly improved even further since last I tried it.

Between GB Studio and Pulp I think a lot more people are trying making these old style games.

When I get a chance I will have to download your gb game and load it on my flash cart, it seems fun!