Despite being a game hobbyist, I've never "completed" a game. I'd like the satisfaction of making a small game that I can complete in Pulp without much in the way of PulpScript. However, I'm such a ridiculous dilletante; I tend make problems for myself:

Is there a basic game design book or article or does anyone have advice on how I go from start to finish? I'm open to reading, the briefer the better—if I read about game design deeply, I worry about scope creep.

How I scope a game? How can I stay true to that scope while conceptualizing and developing game content? How can I plan the work and deliver "the thing"?

Are there guidelines for room-based, light-dialog-centric games, especially when it comes to fun? I tend to not play those types of games, but are there ones I should try out to get a feel?

Even a halfway playable game would give me a sense I'm not treading water.

Thanks in advance for anything useful!

Not sure if this is what you are looking for, but here is some technical documentation on Pulp.

You could probably make a game where you collect keys and open doors to progress without using much Pulpscript.

Thanks, I'm more looking for general help on making small games and less about technical guidance.

The keys and doors makes sense though—I can try to limit my planning to things like that.

My suggestion is to do a few small experiments or prototypes in Pulp, as the goal of going from zero to complete game (even a small one) is still lofty.

On the other hand, a game like Adventure should be relatively easy. A maze of interconnected rooms, a key, a door, a dragon, a win state. 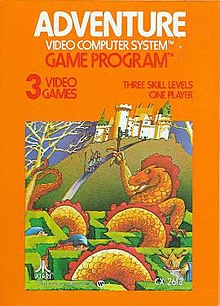 Adventure is a video game developed by Warren Robinett for the Atari Video Computer System (later renamed Atari 2600) and released in 1980 by Atari, Inc. The player controls a square avatar whose quest is to explore an open-ended environment to find a magical chalice and return it to the golden castle. The game world is populated by roaming enemies: three dragons that can eat the avatar and a bat that randomly steals and hides items around the game world. Adventure introduced new elements to co...

I'm also a hobbyist and can sympathise with the struggle!

I like to follow the philosophy of limitation breeds innovation. This kind of thinking seems to fit well with the Playdate in general with its 1-bit low resolution screen and handful of inputs, but it goes double for the strict constraints of Pulp.

I have only "finished" a handful of playable games myself. One, URIMA, is a stealth-puzzle game played entirely in the browser's address bar. That's a heavily constrained 1D space to work with, but more than just the novelty those constraints helped me stay focus and avoid scope creep - there wasn't much possibility for it! More than that though, I actually started with the idea of "can I make a game in the address bar" and then ideated and designed the game from those limitations. The gameplay mechanics were built up out from the technical restrictions as opposed to having an idea for a game mechanic and then struggling to implement it. There were other big advantages to my choice of constraints too - I didn't have to worry at all about art, because I was limited to ascii characters, I didn't have any sound, and my choice to have the game state captured entirely by what was displayed in the address bar meant there was no need for even a game loop.

Translating that thinking to Pulp would be to do as @sgeos says and restrict your game to out-of-the-box (or nearly-out-of-the-box) mechanics. Think about what is possible and then build up from there rather than thinking about what you'd like to make and then struggling to make it fit.

Are there guidelines for room-based, light-dialog-centric games, especially when it comes to fun? I tend to not play those types of games, but are there ones I should try out to get a feel?

At risk of coming across as only self-promoting (and I certainly don't want to pretend to offer some great example of game design), my first graphical game Unawakening is room-based and dialogue-centric. The core gameplay is a trading quest between characters, and the characters all move around with new dialogue at each stage to make them feel more alive and the world more engaging. Perhaps it might spark some ideas!

I've heard of but never played Adventure, playing a bit of that now I agree that's a great model to use an upgraded maze. I can even avoid visual scope creep by using black/white tiles.

Some actual game recommendations after having a think:

Minit - 1 bit adventure game, played out through a repeating 60 second time limit for each life.

Half-Minute Hero - Or take it even further with this condensing down of an RPG into just 30 seconds!

Moon - Subversive and renowned RPG, it's really all just about talking to people!

The Legend of Zelda: Link's Awakening - A masterclass in pocket-sized design, it's the trading quest that this game introduced to the series I'd point out as an example of making compelling gameplay out of simply walking between and talking to people.

The common thread is that these are all really puzzle/adventure games. If your mechanics are simple in both scope and execution, its likely the hook will come from making the player think about what they have to do next I suppose!

I suppose it could be useful if someone were to write up a few template descriptions for easy to implement Pulp games. That way inexperienced developers just need to reskin and come up with a new story. They can think about innovation after that.

Thanks all! This has been enough to get me going with a bit more confidence! I made a plane-jane, single-room dungeon maze.

I did use some pulpscript but managed to keep scope creep under control.

Still need to develop the planning and patience skills—this was all improvized. Butt power, sitting down and doing the boring parts of planning and being reasonable. Which end up not being so boring, especially if you don't procrastinate or ruminate about it too much.

A book about that would be useful! Might need to be in the self-help genre.

I'dd add to it:
"Do you suffer from a cornucopia of dread? Try making an incredibly small game within your current abilities. Sometimes the satisfaction of completing a thing will help dispel ghoulish doubts. For the project, don't worry about scope creep, project management, or whether it's a good game. Just make a thing that has some sort of beginning and an end. Ideally test it with another human, and enjoy a pat on the back. You're not cursed! The things you dreaded weren't so terrible. Now you can move on to more ambitious projects with a bit more confidence."