At the time, I was working at a real estate office doing general business stuff. Lots of spreadsheets and numbers and printing and meetings. At one point, we moved to a new building. At first, it was awful. I no longer had my own space, the desks were uneven, and I no longer had the nice little garden area where I would normally eat lunch. This new building did have something to offer though, something that one me over. Five stories of quiet office space to explore.

I made it my mission to explore as much of the building as I could. I knew which stairway doors were open, what business were on which floor, and what TV shows played at certain times in the lobby. Most importantly, I became familiar with the bathrooms. I knew which ones were the most empty, which were the cleanest, which were unlocked and, if they were locked, whether it was a keycard, number pad, or traditional key. This experience was ultimately the inspiration for Bathroom Break.

At the time, I was learning C# programming and was interested in making a text based game that only utilized the console window. It was fun, but became difficult to export to both windows and Mac. While the game was "completed", it wasn't in a position that I felt like anyone could actually play and enjoy it. 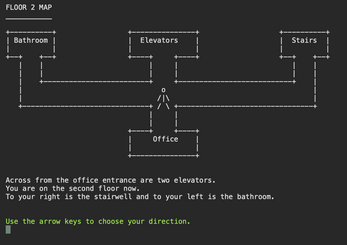 As soon as I saw the Playdate, I knew it would be a good fit. The retro aesthetic, the accessible design tools. Heck, even the crank on the side was perfect for flushing a toilet! I began learning Lua and experimenting with Love2D but could never find something I liked. Then, Pulp came out. And it was perfect. I knew this would be the platform for making the ideal version of Bathroom Break.

I invite you to join me as I work on this strange little adventure game. This first post is the intro but you can expect a more pulp-based update soon where I explore how I turned this text based game into something that would work with pulp and feel at home on the Playdate.

I would love to, I just don't have the time. Maybe in May, after I'm done with school, I can make some pulp videos and stuff but it just isn't in the cards for me right now.

The first thing I had to determine is how this game is going to work. In the text game, the only graphical components were the ASCII art hallways where the player could go up, down, left, or right. Everything else was typed out in a menu-based descriptive text style. That is not what I wanted to make for pulp though. I wanted something more interactive and visually interesting. So, what do I need to achieve this?

I decided to go for a multi-tile player that walks around on just the left/right plane. He wouldn't need to jump or move vertically at all, as this game is pretty grounded in reality. So now, I needed to make my character sprite.

Now, I have VERY little experience in pixel art and had no idea where to begin. Luckily, Neven posted a picture of a little 3-tile tall person that fit the kind of style I wanted to go for.

I made a couple changes and tweaks and ended up with something more my speed.

Now, here is where things get a little funky for me. I, very foolishly, made this character a 2x3 model. That meant I had a left half of the head, a right half of the head, and so on for the body and legs. This left a lot of white space and because of all the white space I had to spend more time figuring out ways to fake transparency. To my credit, I did a pretty good job. I had the player automatically checking which direction they were facing and what tiles were behind it so that it could draw the appropriate body and head.

Sidenote: That E1 and C5 were just there to help me fake this alpha. They were items that swapped the player sprites on collect. I changed this to a better system which I'll get to in a later Dev log.

After all of this hassle I realized two things:

I don't know what possessed me to make this way more complicated than it needed to be, but this character sprite could definitely just be 1 tile wide and 3 high. Upon realizing this, I started a new game, imported my environmental artwork, and remade the sprite to just be 1x3. I also changed the sprites head to make it a little more round.

One additional thing I needed to solve was the basic hallway layout. In the original game, the player uses the arrow keys to choose a direction in the hallway. Here though, they couldn't go down or up. I could either make the hallway and overworld thing or, more simply, add a door next to the elevator to substitute for going down. Problem solved!

After adding a door, some signage, a plant, and scooting the elevator, everything looks a lot more slick.

You may notice in that clip a nice little interact button that pups up above the door and elevator button. Wondering how I pulled that off? Well then stay tuned for next time!