Blocks in the Box - A fun little combo puzzle game

Hello! After receiving my Playdate I decided to see if I could develop my first game for it. The result is Blocks - a fun little combo puzzle, a bit like Tetris, but with a twist!

This is version 0.9 of the game. I am still polishing it (for example, most of the sound effects are quite bad currently). Anyway, I would love to hear what you think of it! 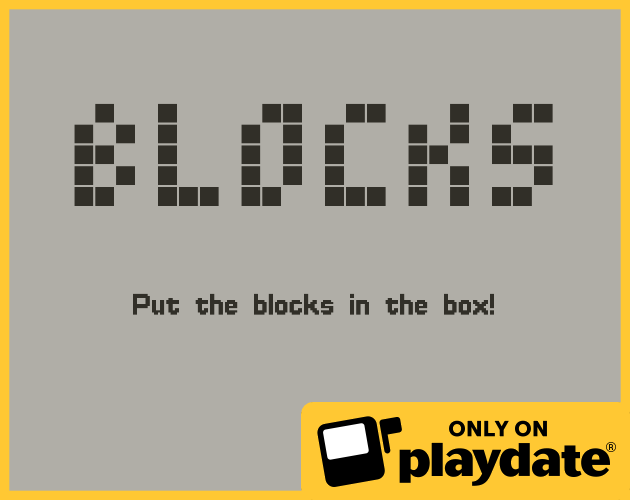 Blocks in the Box by Luca5

Thanks! I wasn't sure if the mechanics were going to work when I started developing and I found it a bit hard to judge it myself, but the friends and family that played it seemed to genuinely enjoy it.

I've just uploaded a new version of the game. It turns out there already was a Playdate game called Blocks, so I renamed my game to Blocks in the Box to avoid confusion (I also updated the title of this thread).

When showing the game to more people I noticed how almost all of them were expecting the d-pad work reversed (expecting you needed to push in the direction you wanted the blocks to go). And after receiving a comment on itch mentioning the same, I decided to reverse the default direction of the d-pad and add a menu settings allowing you to change it back. I also decided to auto-check the setting for people who have already played an older version of the game, because they may have gotten used to the old behaviour.

This version of the game has much nicer sound effects when you clear one or more edges of the box, when you go up a level or when the game is over. Big thanks to MaskedSound for this. The sounds when moving blocks or rotating the box are the still the same, using this very handy function to use the synth.

And while I was adding menu items, I also added a menu setting to flip the rotation direction of the box as well as an option to restart the game.

In a future version I'd like to add a little shake effect to the box when you try to add blocks that don't fit, not sure when I will get to that though.