It is very nearly complete and I am currently looking for people to help playtest. If you're interested, please grab an early access copy from Dropbox - CrankTanks.pdx.zip - Simplify your life and let me know what you think! Since it is not quite finished, there are of course some known issues, areas lacking a bit of polish, and so forth, but hopefully nothing too major.

And if you'd rather wait for the final release, it shouldn't be more than a couple weeks. Keep an eye on Crank Tanks at itch.io: Crank Tanks by ethannicholas

Nice work! A couple of bugs from a few mins of play:

The tutorial "destroy this crate" text obscures the tank and UI if the crate lands close to the player, making it really hard to destroy the crate!

When enemies are having their turns, pressing the A button makes them fire more shots!

Can't wait for the finished version

Really looking forward to this! So much attention to detail and so many cool little extras. 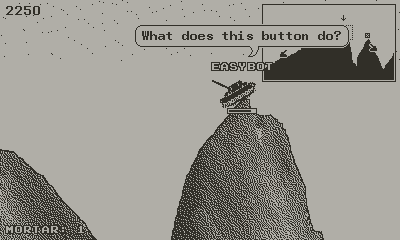 This is very nice and polished, but the pacing is a bit of a challenge. It's hard to dial in your shots when you spend so long waiting for your turn, especially if you spawn far off from other players in the map and have to spend multiple turns just getting into an attack position.

I can't imagine it being easy, but a fast-forward button would make a huge difference for me. Just, like, if you're not currently controlling your tank and you're holding down A, everything runs at 2x (3x?) speed.

Also not entirely sure that the dirt ball has fun potential as it stands now -- enemies buried in it are harder to hit, and if you're in it you can't easily cut your way out without doing self-damage. Yeah, it's bad for you, but not in an exciting way.

I appreciate the feedback. I'm still tuning the projectile speed, and agree that it's probably too slow right now.

I'll point out that the position where your last shot landed is shown on the minimap, so that may help you with dialing in your shots. And the trick to digging yourself out of dirt balls is to stock Excavators, which are cheap and do almost no damage.

Game looks great and will be an instant purchase on release. This is a top-tier game for the playdate.

I will second the suggestion for non-player activity to be sped up. 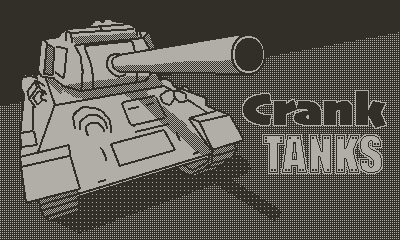 A new take on the classic artillery game genre

In addition to various tweaks and bugfixes, play has been considerably sped up from the last version. Let me know what you think!

Very fun! You can choose 1-v-1 to reduce enemy play time, and there are so many weapon choices that all do such different things! I think I'll do some human-v-human next just to mess around with them all.

(I wouldn't object if a "2x fonts" option were added. My eyes aren't good enough to reliably make out the text in the bottom corners—weapon names and angles—when the lines of the letters are on top of the mountain art.)

By the way, I don't see your game listed when viewing the Playdate tag on itch—even though clearly you have assigned that tag—and I have no idea why. Hope that changes, this game deserves to be found!

Is it possible it's set to Draft or Restricted still? Or is Itch just being its quirky self?

(Clicking your link does work fine—the game just doesn't appear when browsing Playdate, nor when I search for "playdate crank tanks." Also doesn't—yet—come up in a Google search but it DOES come up in DuckDuckGo.)

I just double-checked, and it definitely shows as "Published".

I don't know about itch.io specifically because this is my first time publishing anything there, but it's very common for things like tag searches to be cached and only updated once a day or so. Hopefully it will start showing up in the search results soon.

Yes, definitely some of Itch's quirks are of the "delay" variety so that's not unlikely. (My app never did appear in New Releases--just a bug in that case, according to their support, but it was never fixed. So I cast a suspicious eye on Itch's quirks now. My app CAN be found in search, though, so it's not the same situation.)

Looks good I will pick ot up today and let you know what I think after playing a bit. I was curious are there high score and or online leader boards. I read some posts I am going to wait till the crash issue is fixed the game is looking fantastic cannot wait to play it.

It does track local high scores, but unfortunately the networking APIs are not currently public so it is not possible for non-Season games to implement any online functionality.

The crash issue required very specific circumstances and was fixed a couple of days ago; I am not aware of any significant outstanding bugs.

Great downloading now. Wow I really like what I see and hear so far great game lots of fun. I will get some more Playtime in and leave a review on itch.io.

Beautiful, very glad to hear that you're enjoying it! And of course I welcome any further feedback you have to offer.

Lots of fun but as soon as my tank got destroyed the game crashed.

Well, crap. Can you send me the errorlog.txt / crashlog.txt from the Playdate's root directory?