Hi, I'm Harspoon, but if you're reading this you can call me Zion.

I have always wanted to make games. Every few months I'll jot down a concept and non-stop fantasize the what-ifs of making that concept into a reality. Seeing the Playdate has contributed to that being even more prevalent, but with Pulp and soon the SDK, I'm finally going to develop a complete game.

So that brings me to my first game, which is being developed in Pulp.
Even with countless game concepts, I had no idea where to start. So I doodled in Pulp and came up with this character design. 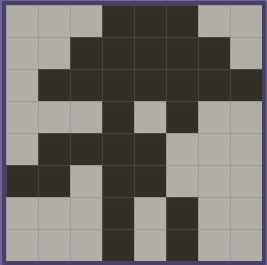 I am not the greatest pixel artist by any means, but I feel like I did a pretty good job at making an 8x8 samurai.
So from here I had more of an idea of what I wanted to make. 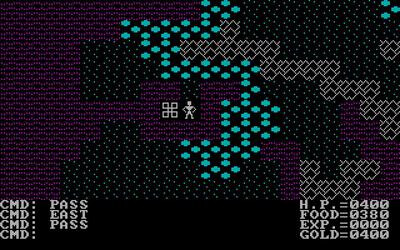 This is Ultima II, the gameplay is not my favorite, but the style of the graphics are very charming to me and the movement is already done for me with Pulp, so I decided this is what I want my game to look like.

Some tinkering around later and... (Those were some janky pixels on the hat and the grass

Yeah, it needed some work, but hey I liked the direction it was going!
The next things I wanted to implement were a currency and a health bar.

This was my first slight road block with some code, but the great people in #pulp on the Playdate Squad Discord were able to help me out!
Special thanks to @Guv_Bubbs for giving the idea to have the blade crack before breaking, it's one of my favorite additions yet!

And what's the fun in having a health bar if you don't have enemies to lower it?

A rip-off of one of my favorite Hearthstone cards, this is my possessed villager enemy.

But let's just say that I had some...complications with my original enemy movement code.
I worked a good few hours at it before becoming discouraged and considering cutting down the scale and design of the game entirely.

Then after a day or two had passed, @Kleist posted an extremely well made and digestible chaser enemy tutorial. After playing and prodding around with that code for an hour or so I implemented it into my own game.

A few new rooms, simple yet effective sword, some sound effects, new font, and a new text box later and...

This is all I have to show for now. It's not a lot, but I am very happy with what I've been able to accomplish in a little over a week.

Special thanks to @neven for being super helpful and responsive within the Discord server and especially for improving the design to the house roof tiles!

If you're still here I recommend checking out @Guv_Bubbs' Dev Blog on his Light Game made in Pulp, some really impressive stuff there!

That's all I've got, hopefully I'll make enough progress to make an update to this soon!

What an awesome write up!

Every time you show off your game i'm always so impressed with the style.
You have a real talent for creating a mood.

Looking forward to following the progress!

Yeah I have to say your game is looking great! Love that sword life bar

I'm also new to making games, I've been trying to make like a prison game. Not happy with progress and it's my first time coding anything so its taking me years, haha.