Errors within playdate.keyPressed() silently fail and remaining code is not executed

Look at the following code: 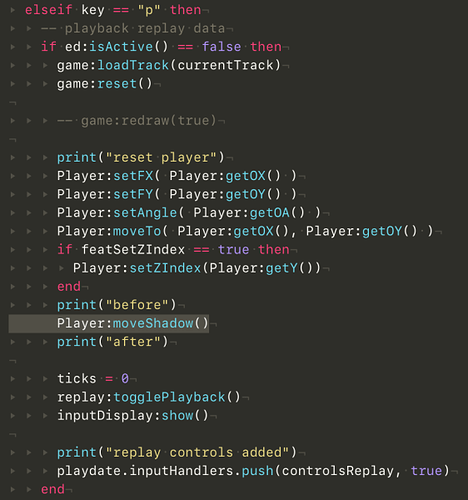 Happens in all of:

Above issue has been edited/updated

So I looked a bit into this issue and it seems some callbacks don’t report error as expected (probably called using pcall() but doesn’t handle the error?)

playdate.sound.micinput.recordToSample() callback reports the error but it is incomplete, the file or line number are missing.

and an error in playdate.debugDraw() will crash the simulator

I did not test all the callbacks so this is not exhaustive.

I added a fix for keyPressed/Released(), then I saw Nic’s message. I’ve got a fix in now for the debugDraw() crash. For the others I think it’ll just be a matter of replacing the lua_pcall()s with our function that first puts debug.traceback() on the stack as an error handler. That’s got a non-zero chance of adding mystery bugs so I’m going to push that til after 1.1 so I don’t hold it up or necessitate an emergency 1.1.1

aha! It looks like lua_call() is what we want if there’s already an error handler at the top of the stack. That’ll avoid some unnecessary overhead.