How do I - Check for a crank revolution?

So using on crank do how do I then check how much crank has been used? Is there a way to get a full crank revolution? if I do a manual check variable like the one below, will that tally up to the actual crank movements, are there 360 "clicks" in a revolution on the actual hardware?

Otherwise, there any accessible variables in relation to the crank, for example crank.position (how many degrees it currently sits at)? 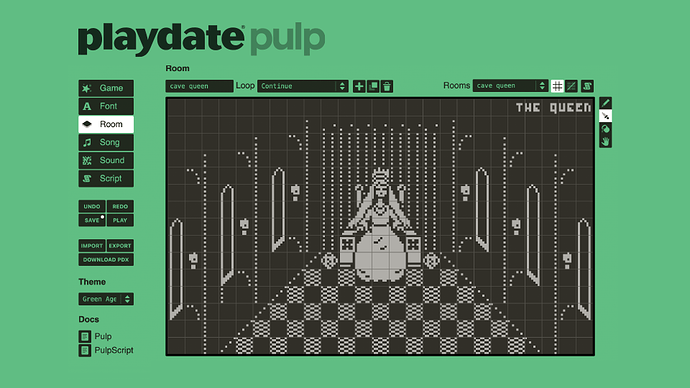 For a no-code alternative to the full Playdate SDK, try this click-and-place game editor right in your browser. Make a game with no code, or maybe a little code!

In every event, its aa and ra members will be set to the current absolute angle and the amount of change since the last frame of the crank in degrees.

In the docs under Playdate PulpScript see:

That should be enough to do the calculations you want.

The number does go up to 360, and if you want to count revolutions you'll need to store that in your own variable, probably adding the "ra" value every frame.

Hey @BoldBigflank Yeah I saw that in the docs but don't fully understand it. It seems to imply that the crank doesn't have a "fixed" position or number of clicks logged on the hardware and that the crank is more a relative thing. Unless i'm misinterpreting it.

Yep, I don't think the crank clicks. It's being measured in degrees, but measured as a floating point number.

Try this out. It'll record the total crank angle in a single direction as well as the direction it was turning.

Yeah that works a treat for crank logging, cheers!