PD Reader - a pdf/comic/zine reader for your Playdate!

I've hacked together a simple app to display "pages" of images loaded from the user data folder. These images can be hand drawn or generated from a PDF using a tool like ImageMagick and fine tuning with @timhei's onebitdithertool.

My intent is to create an app for the more artsy folks in our community to easily create comics or zines without having to build a bespoke app for their work. Instead they can simply share "documents" - which are just folders of compiled PNGs - and users can drop them onto their device to get crankin'!

This project isn't meant for interactive comics, but if you're looking for such a thing, I highly recommend @cadin's Panels framework!

For those curious, I used Mausritter and Ironsworn as examples in the GIF.

With @6AT0's permission, I've attached Playdate Digest NO. 1 as a sample. It's not the best quality as I converted it fairly quickly, but it's just meant to be a quick demo

a pdf/comic/zine reader for your Playdate!

Thanks so much for this! I just got it working and I think right off the bat I'd love to see a full screen option that got rid of the filename & page # on the top of the screen. I'll be messing with this more but great work so far!

@pcenginefx As requested, I've added an option to hide the top nav bar! I've placed it in the system menu for now, but I might add an in-app settings menu if I add more user options in the future. 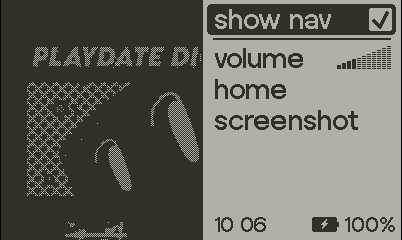 a pdf/comic/zine reader for your Playdate!

Thanks much for the update and taking my request! I have a few more "like-to-have" feature requests below that obviously get into the panels territory so if there is any way to implement them it would be great as I find the panels framework a bit more involved:

Thanks again for your work on this - the more cool projects like this people have to use on PD the better!

Hmm those features do venture into Panels territory, but it just occurrd to me I could integrate Panels into PD Reader. I'll poke around and see how feasible this is

Thanks so much for looking into it!