Hello everyone, this will be my real contribution to the dev forums, but I've been working on a small project as a way of introducing myself to Pulp / Pulpscript. I had the idea for a game that randomly generates a maze, which I've done in Unity before, so I knew the logic relatively well, I just needed to translate that logic into Pulp.

I used the theme of a rat that, naturally, wants cheese and is willing to solve simple puzzles to get it. Here's a screencap of the "main menu", which just has one option that the player can toggle by moving the mouse over to the lever and interacting with it. 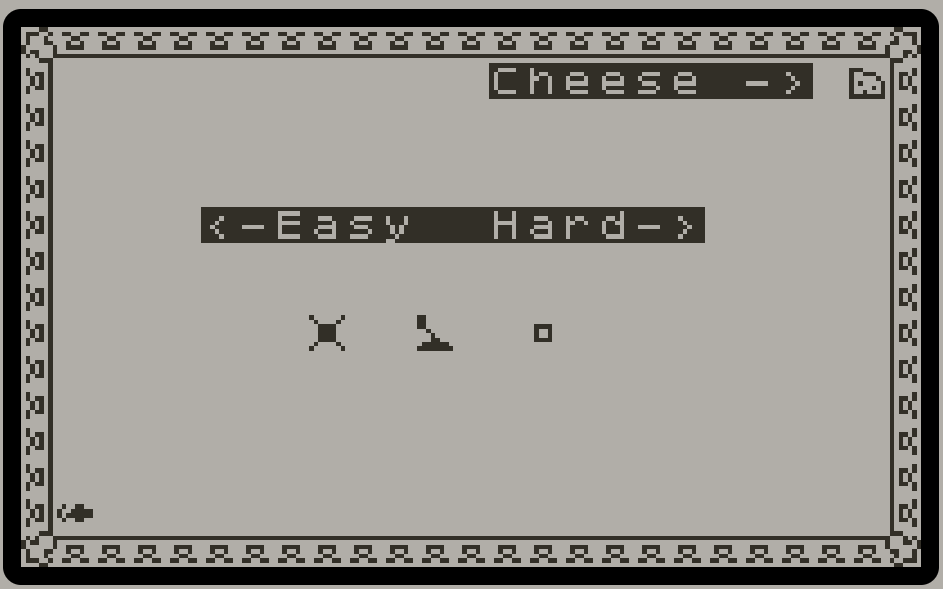 "Easy" mode generates a maze with no animating tiles. "Hard" mode generates a maze with animated tiles that are meant to be disorienting. You might find these animations to be annoying or even nauseating, which I sincerely apologize for, but they were a way to make the maze legitimately difficult without adding a lot and were a blast for me to play around with as I experimented with pulpscript. To enter the maze, simply eat the cheese.

Once you're in the maze, eat the cheese to escape. In the future, all player UI will be cheese based. In rare cases (idk the math but let's say about 1 in 20 maze attempts) the maze will be impossible. I could pretend that this has a philosophical meaning and that I intentionally put it into the game to teach you a lesson, but really it's just some faulty logic that I plan on fixing at a later time. (Do I smell a sequel?)

'Rat Maze' features two original songs that, together, are shorter than the amount of time it takes to book a haircut appointment. I like to think the music does a good job of really making you feel like you are a rat in a maze.

Thank you for your time, feel free to look through my code, and if you have any questions I love talking about my own projects. This was my first foray into Pulp so there are some things I'm already looking to learn more about.

I will admit, I woefully underestimated how much tile animations would mess with my ability to solve a maze lol

Great game! I will have those songs stuck in my head the rest of the day