Ever since I got my Playdate last May I've been eager to develop a tiny game or app for it. After committing some of my free time to this project over the last few months I'm excited to announce the release of Music Box---a tiny musical instrument for the Playdate console. 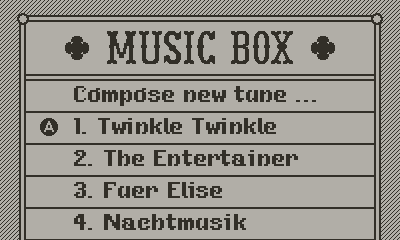 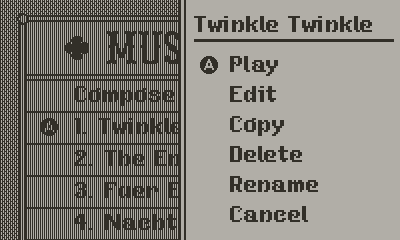 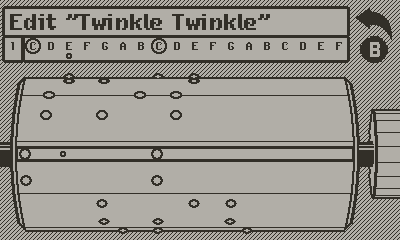 Simply select one of the well-known tunes included in the app and start turning the crank to advance the music. Or you can get creative and compose your own short song with the built-in editor.

I hope you enjoy!
-Tizian

Very slick. That 3D spinning barrel, turning to visible pins at the top and bottom, is the coolest!

Another "it's so obvious when you see it" use for the crank! Add me as another fan of the visible pin height as the barrel rotates, it's a great detail

Wow; what a delightful little app. Great job, really! It worked flawlessly for me (on hardware) and is straightforward and simple to use without needing any explicit guidance.

Notable things / stuff that I appreciated:

That was a big wall of text. Mostly just thinking out loud about things that could be interesting!

I really, really like this. Thank you so much for making it!

Edit: Couldn't help myself and was messing around with the files. I renamed one on disk, things launched fine -- but then when I checked again it was renamed back to numeric format? Hmm! I'm so intrigued now.

Thanks for the nice words, and I'm glad you're enjoying it!

Agreed, that would be a bit smoother.

The crank is much more fun though

But yeah there is no good reason not to allow it.

A few people brought this up already. It's a question of how "realistic" this music box should be in the end. After all, there is only a limited number of pins that fit on the barrel and it would be weird if there are hundreds of steps. (Though to be fair, I already cheated a little bit. There are 48 steps with 10 degree increments each, so the barrel wraps around 1 + 1/3 times around...

My initial instinct would be to not have an auto-play feature. But I like that windup idea is so much that I'll have to add it I think

Yeah the idea is that sharing would be very easy by exchanging the files. But it's not as smooth as it could be. (Sidenote: networking functionality would be a great addition to the SDK....) The "automatic numbering" happens every time the game is started and just helps with defining a clear ordering for everything. With arbitrary filenames, each song needs to track somehow its position in the song list. I'll try to revisit this process in a future update. For now, it should be perfectly save to drop in new files with any name, and it will just rename them to follow the automatic convention.

Ah nice catch. There's so many corner cases of different inputs and menus

I'm currently super busy with other things and won't have free time to work on any new features until the very end of January. But this really motivates me to keep working on this for a bit longer.

Btw: I'm also planning an option to "tune" the individual notes so you won't be quite so restricted in the type of songs you can create.

Nice! Thanks for the response.

t's a question of how "realistic" this music box should be in the end. After all, there is only a limited number of pins that fit on the barrel and it would be weird if there are hundreds of steps.

Yeah this is true and something I had thought of that as well.

networking functionality would be a great addition to the SDK

I really like the idea of sharing songs and having a place to download some collected set of user-created tunes. That could be a list of files at the first post here, or something on your itch page.