Following Arisa's clarification of the feature request process, I want to request a UI change for users on mobile.

Pulp works suprisingly well on mobile, aside from some audio issues. Scripting will never be good on mobile (or it's already good if you have a keyboard and mouse), but a phone would be perfext for art and music creation on the go.

Creating art already works well in principle: you can zoom in on the art box, edit pixels with taps, etc.

Only three issues remain, two of which at least would be an easy UI fix:

I would suggest that a mobile version of the site is rolled out with absolutely minimal changes:

Doing this would allow developers to work on art assets in spare moments, and make Pulp development more of a fun activity for anywhere instead of work that has to be done at a desk. I think it would increase engagement, reduce development time, and generally make life easier for devs.

Much more difficult (and less likely to be implemented) would be a fix for the music page on mobile. It has three issues:

No clue how to fix the last two, but simply moving the play buttons for mobile users to the spot on the left , in between the full score and the one-voice score, would allow quick playback and at least make it usable. 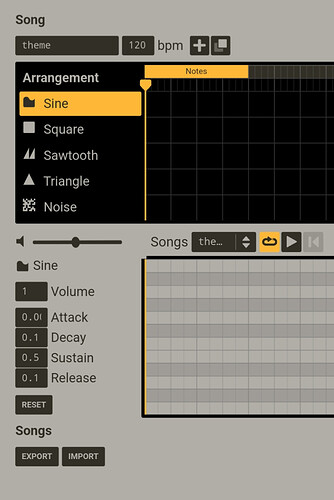 This would have the same benefits as above in terms of allowing away-from-desk engagement with pulp.

As a final note, there are various apps for pixel-art and music development, but none of them are well-suited to Pulp.

No art apps that I have found are meant for 1-bit art development. That means they dont have the ability to quickly swap pixels between black and white; any mistakes require switching colors manually, erasing, then switching back to black/white. It's just a pain and not fun; the current Pulp page is better despite the shortcomings on mobile.

No midi apps I have found allow scores with only one note per voice; it is therefor similarly difficult to change any wrong notes. Obviously they also dont use the exact sounds of the playdate, and also require conversion from midi to playdate format afterwards.

As someone who has used Pulp on mobile, especially and mostly for drawing tiles pixel-by-pixel, I would also like some of these UI enhancements for doing that.

I am using pulp on iPad at the moment and so far it is not bad (except for the page scrolling when sliding the finger).

The scaling issues would not be present on the ipad, I imagine, but you also cant have an ipad in your pocket all the time for the same reason.

Does the pixel drawing work when you drag across multiple pixels?

The pulp interface fits perfectly on the ipad but as I said the screen slides when sliding the finger so the pixel drawing doesn't work across multiple pixels.