As always, you can update your SDK on macOS by clicking "Check for SDK Updates…" under the Simulator's app pull-down menu. On Windows and Linux, please visit http://play.date/dev and download the new installer. (We are working on update solutions for Windows and Linux.)

Wanted to let you know that when I download the latest SDK build for Windows it gives me build version 1.9.2

Sorry to hear that. Can you let me know what country you're in?

I’m also having the same problem as @borsjt. I’m living in Norway.

When you get a chance please try it again. We've had some issues with our CDN caching 302 redirects when it should be so I have to purge the CDN cache for updates to work.

It works for me now!

Here's a direct link you can use

Apologies, this is the first time I try this on this machine, so this might be a basic question!

It looks like the 1.9.3 tools shipped for Mac OS are x86_64 only? I ask because the rest of the tools (simulator, etc) seem to be universal builds, and it looks like when I try and run make in the C_API examples, I can't open in the simulator because of x86_64 vs AArch64 errors on an AArch64 Mac.

Error in the simulator:

EDIT: I was able to resolve this by replacing my x86_64 conda environment (Which included tmux) with an arm64 one. Apologies!

Does the SDK 1.9.3 simulator update and website link work on MacOS? I tried to download and upgrade, but the simulator says it is still version 1.9.2.

After supposedly downloading and installing the latest version of the SDK. 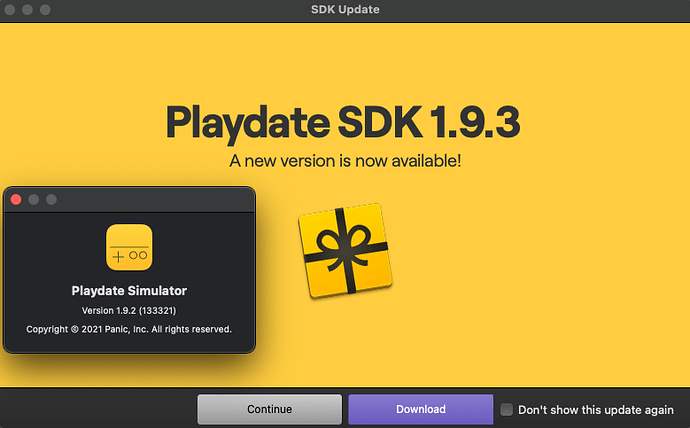 I've no clue when it comes to Macs but it seems like you just need to update your path variable.

To what? After supposedly installing 1.9.3 there is not PlaydateSDK-1.9.3 directory. Last time I installed, PlaydateSDK pointed to the right version, so there was no reason to modify the path.