Hello everyone!
I wanted to create a thread about tricks and workarounds for the Pulp music editor
Feel free to share your own discoveries in this thread too!

A way to create multiple notes playing at once in the same channel (for chords):
If you create an arpeggio and increase the sustain (varies per BPM, 0.2 works nicely for 300 BPM i think), you can play multiple notes in a channel simultaneously, perfect for a lot of situations

I wanted to crank the BPM way up and do some math as a trick to get more subdivisions for a song, but it seems the editor caps the BPM at some point. Is there a way to tell what is the max BPM that the song editor will recognize?

Just discovered having the Sine voice down in the 0 octave range and little sustain is working for me as a good little kick drum sound.

I love using the noise engine as a drum synth. Sine seems to work best for bass/low end to my ear.

Here are some examples from the port I'm working on. Really wish they would expand the length limit, but I'm able to do quite a bit with the limited tools/space avialable.

...also, I love writing these little chip tunes. If anyone is looking for some pro-bono composition support, I'd love to do more of this in my spare time.
music samples.zip (3.2 KB)

Not sure if this is considered as a bug. You can drag long notes while pressing alt (duplicate) and create a harmony. The notes can't be triggered at the same time though.

That's interesting. I was under the impression that this was probably a bug. I've been getting harmonies with just cranking the release haha

Here's a little live session where I show how to make a little sketchy theme in less than five with pulp.

copy paste is one of the answer
music editor also go to the last not in term of size of one part in the partition area... 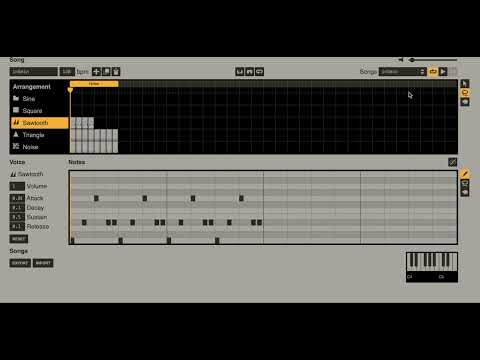 the VOLUME vs DISTORTION problem.

(if this is TOO LONG, just read the BOLD parts)

as I work on an update to eyeland (shameless plug), i'm finding it's really tough to get close to the loudness of music and sound heard in games made with the SDK and other non-pulp environments without it distorting/clipping. i assume that with those games you can bring in externally-made mp3 files or some such format and those files can be processed with audio volume compression. (compression helps to to tamp down the loud spikes and bring up the low valleys, making it possible to raise the overall volume of your music without clipping or distortion.)

anyway, as far as i can tell there is no audio compression applied to music made in Pulp. It's a lovely, VERY basic editor — just simple sound waves piling up on each other and because of this, your music is going to either sound a bit quiet, or distorted.

knowing some things about the nature of these sound waves will help you get a little extra volume while avoiding too much unpleasant distortion.

▷ the sine wave is a curved shape and has a very smooth sounding tone, so when it distorts, it's really noticeable. it sounds quite different...

▷ the triangle wave is a little bit brighter/ringy-er because the shape isn't curved, it's straight lines angled UP and angled DOWN, but it's a smooth tone so when it distorts it's also easy to tell - it's does not sound good.

▷ square and sawtooth waves have harsh shapes (instantaneous jumps/dips in the wave amplitude/height) that makes them "buzzy" in the way that they sound, so if they clip or distort a little bit, it's much less noticeable -- you can get away with more.

the peaks and valleys of square and sawtooth only slightly line-up with each other, and they do not line up with sine and triangle waves... (you see where this is going.)

▷ and noise is just that: stochastic chaos! it's pretty much impossible to make the noise wave distort any more than it already is.

OK - now we know that stuff, here are some things to keep an eye on.

▷ try not to have SINE and TRIANGLE waves creating harmonies or notes that play at the same time... instead, try SINE and SAWTOOTH -or- TRIANGLE and SAWTOOTH -or- TRIANGLE and SQUARE... not only do these combinations help prevent the perfect alignment/reinforcement of peaks and valleys, the inclusion of a "buzzy" wave sound (sawtooth or square) helps to "hide" slight distortions that might happen when the volume gets too loud when the notes combine.

▷ if you are getting clipping only on the very peaks, maybe try delaying the attack slightly of one of the tracks that has notes when the distortions happen (i've never done this, but it might help?

OVERALL - try keeping your music from getting too dense. making sure there aren't too many notes at the same time piling up on each other will help. I went back to a few tracks and listened for problem areas and just took out a few notes here and there and it was hardly noticeable. sometimes i'd move the notes to create a sort of syncopation and wound up liking the edited track better.

if anyone else has any ideas on how to drive up the volume, but avoid distortion in Pulp, I AM ALL EARS!