I just wrapped up and released my first SDK game.

Available now, at https://limitlis.itch.io/shooting-gallery. It's my first time writing anything in Lua. I'm pretty proud of what I managed to build especially because it stays at a pretty stable 30 fps, only with the occasional dip to 28 or so.

Like the title says it's a carnival inspired shooting gallery. Where you try and shoot at metal targets. With some high risk/reward bombs thrown in to keep it interesting.

Each round starts off with 30 seconds. But an occasional time boost will fall from the sky for you to shoot and extend that time.

There's a big emphasis on high scores, with them being front and center on the main screen. 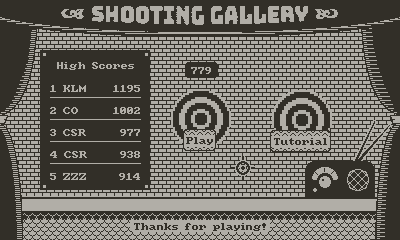 Even the pause screen has a controls overview, scoring guide, and of course the top score as a reminder! 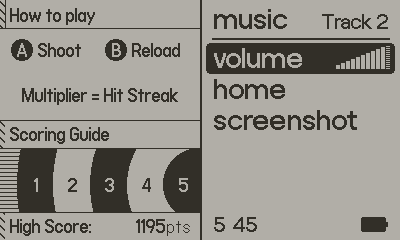 If you decide to give it a try I would love to hear your thoughts!

Thanks and happy holidays!

Thank you so much!

Just to save a separate post and to meet the minimum... I just uploaded a new build with a new powerup, as well as other bugfixes, audio tweaks and other misc improvements.

Just wanted to post a quick update to say that I have a free demo available now. It's the tutorial from the main game, but after the walkthrough you're essentially dropped into the game. Hopefully this gives someone an idea of what the game is about, before deciding whether or not to purchase.

If you were on the fence about buying/playing it, I hope you'll give the demo a try!