THEN, hand-drawn by referencing the psd ... tile by tile! whew.

Well the effect is very strong! It would be nice if Pulp had tools to draw larger artwork for set-pieces and then break it up into smaller tiles, and perhaps allow one to save "groupings" of tiles to reuse bigger assets. When I was practicing in Pulp by remaking a tiny old game I'd previously made in Bitsy, I found it tricky to keep track of all the tiles, especially when there need to be many different copies of the same tile with minor variations like lighting. Perhaps there's a way to handle this with different frames on the same tile? Hmmm…

But in another way I kind of like the bare-bonesness of Pulp, and having to find inventive solutions and creatively re-use things. It's fun to have constraints!

Incidentally, EYELAND has totally inspired me to embark on making another wander-em-up game, and spend more time working on the ambient animations, they really add so much.

Totally! It totally gives that feeling on the rain and white screens. I think it works on the Xennifer screen too. I was imagining how I would have made these rooms, and though I would have made the full-rain screens and then copied them to the earlier screen to avoid re-placing the rain tiles, so I saw the possibility you'd done that and the top-to-bottom wrapping came along unintentionally. But really I think it works well anyway.

tools to draw larger artwork for set-pieces and then break it up into smaller tiles, and perhaps allow one to save "groupings" of tiles to reuse bigger assets.

Agreed! that would have been very useful!

I think it's the constraints that ultimately allowed me to make this thing. if there were a lot more options, i might have been overwhelmed. my understanding of the limits of pulp - and understanding my own limits, helped to keep me on track.

i'm glad it's inspiring - i just played SUNSET! it's fun. i like your descriptive writing, the way you can see your field of view from the tower climb windows AND the guy at the end tapping his foot! nice touch.

I would have made the full-rain screens and then copied them to the earlier screen to avoid re-placing the rain tiles,

that's exactly how i did it - in fact, i made the rain screen without any idea how it would be used - i just thought it would be a cool place to come upon. one of my fave nuances was hearing the distant rain from inside the cave and then stepping out into the loud downpour.

This is effin' sublime

@ronlent Eye'm sure it's something super elegant, but it's eluded me: how are you changing the player sprite to match & overlay the background tile?

I just played this through to completion - properly excellent, all around superb and other superlatives! Although, maybe not quite better than BotW

The animations really make it. All the little details, of course, and the lovely fluid feel somehow despite the tile based movement (almost possibly because of...? I sort of can't imagine it being impressive if it wasn't so clearly built on that grid). The altering perspectives are seamless and always intuitive - I really liked getting out of the lift on top of the hotel for a single example of that, it's like this single moment of a beat 'em up belt scrolling perspective and it's great. The whole screen transition animations were excellent touches, like descending in the lift, and especially when the camera "pulled" back for travelling through the mine! Side note, I was surprised that when you get to the crank in the power station you don't crank it with the playdate's signature input - was this a deliberate joke? It was definitely kind of funny! And then there is that rain - absolutely, definitely the game highlight!

This is my first attempt at making a video game.

maybe not quite better than BotW

Thank you, Scott - I'm glad you liked it - and that you noticed the little nuances. that means a lot!

THE CRANK - haha, yes, originally that was supposed to work with the physical crank, but I didn't know how to program it at first, so i put it aside as i worked on other parts of the game. as it slowly came together, it started to seem that a single crank moment would feel "tacked-on" - like "oh look, here's a single example of the crank working" haha - so i decided to drop it. i almost redesigned that interface to be a button. BUT there were already a lot of buttons...

I'm happy that you liked it - thanks for playing!

it's a little hard for me to explain - certain item tiles that look like regular world tiles act as triggers to make the player swap out with an alternate version - those tiles also change a variable that keeps the player "swapped-out" while it remains in the new area. like when the player moves over a dark area and he swaps out with a white version ..

then there is this complicated business of swapping trigger tiles out for regular tiles as you trip them so they don't make the player face the wrong way IF you move over them again while staying in the alt area...

i always assume that there are simpler ways to do these things BUT my coding abilities are basic.

can i ask you a question? did the sound get distorted at all?

Can I ask you a question? Did the sound get distorted at all? like, especially near the end? did the rain sound good? did the last song during the credits sound ok? I've been having some occasional trouble with that as i test it in the emulator..

The sound sounded fine to me! The rain definitely sounded like rain so I assume it was playing correctly. I don't recall a song during the credits though, however that could just be me not remembering. Sorry I can't be more help

(I hadn't considered that about Pulp Pirate - I've added a zip of the json to the thread if you would like to check it out!)

Never noticed any sound distortion, but not sure what to compare things to. Sounded good to me.

I did get what I assume is pretty far in the game and managed to get immobilized right after I pickaxed a tunnel entrance ( I had just finished the hotel). I suspect I pushed the up arrow during the barricade destruction animation or too soon after.

I've added a zip of the json

thanks - yeah, that's pretty far along in the game.

thanks for the BUG REPORT - i'll check that out. i've had a few glitches involving moving the player while tile swapping was going on, so that doesn't surprise me.

@ronlent Okay, so many questions. I see [a tiny bit of] what you did with inverting the player tile. I get that it's probably hard to explain. You obviously have a knack for figuring things out the hard way (which is most of programming, though I wish many of the things you've achieved would be out of the box with Pulp).

But... how did you manage transparent pixels. That will make many of my tile swaps unecessary? Are you editing outside of Pulp? Teach me your ways. 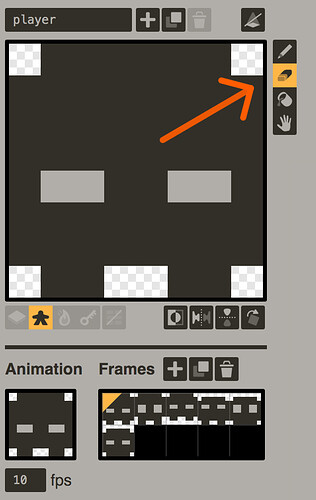 Hey, I just wanted to say that I played this game, got to the end, and I'm overall very impressed.

I dabbled with Pulp myself, but struggled a bit to understand how it all comes together. So, I'm hoping to look at how you did stuff to better understand it all.

Also, I had the impression that Pulp was limited, but you managed to do many cool things with it. This game really showcases how powerful Pulp can be.

I'd say this game is good enough to sell. I'd get it on itchio and listed on Playdate Community Wiki (playdate-wiki.com).

Thanks for playing! I'm glad you liked it.

I had the same impression at first but PULP is pretty robust! -- and i'm hardly scratching the surface of what can be done. most of my programming is just basic "interact with this tile, and then this series of tiles animate, and a few new options swap out..."

good luck with your game-making!

THANKS for playing it! I think I will do that - I see that someone put it up in the "Upcoming" section.

I'm waiting for my Playdate to arrive (group 2) so i can do final testing on the device!

Have you seen the pulp to lua converter? If you wanted to break the bounds of pulp.

I didn't know about this AND i'm not sure what this is - a way to convert a PULP game to a different system so it can be played outside of the playdate environ? something like that?