After my struggle with making the Magical Counter - I wanted to put some of the things I learned into a new project, that was an "actual game" - we'll see how far I get. Right now the game is very easy because you cannot loose, there is no obstacles or whatever, but I plan to add all that.

The idea is that you need to distract the Evil Space Lord with a laser pointer mounted on a space ship to prevent the space lord from destroying the earth (will be more clear later).

The laser is of course controlled with the crank.

I cannot get over how awesome it is to see it on the actual device! - Even at this early stage. 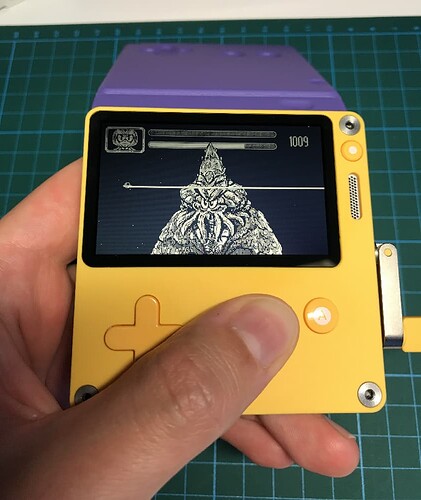 I based it all on this sketch of the guy - no thoughts other than I wanted to bring him on to the playdate: 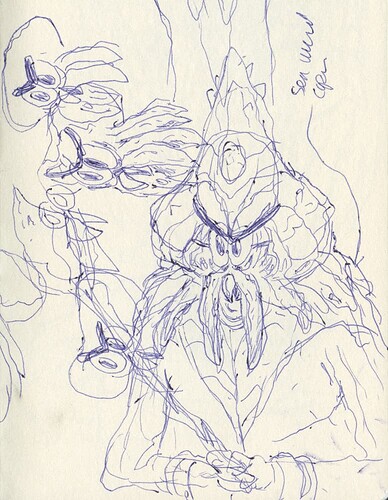 I think it is safe to say that the player avatar is heavily inspired by the amazing Ultraman Hayata styled outfit.

Added some space junk and gave him his scepter, which will rise and the goal is to keep it low or he will trigger the destruction of earth. 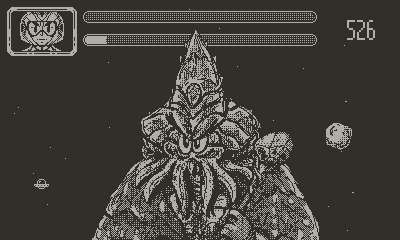 Things are progressing quite slowly as there really is a lot to take in compared to a simple counter, I have had so much trouble with that stupid laser, and I know for sure the solution I came up with is terrible. But I think I am moving on to adding collision, we'll see if I can figure that out. So it feels more like an actual game.

A question atm, is there any reason to sit on the left side of him? since all the asteroids are coming from the left wouldn't it be better to play on the right side. Maybe after you deal with everything necessary, you could give the Evil Space Lord a hitbox and position him more to the right so that the spaceship has more room to work with. I'm also always happy to play test for you, however I don't yet have my physical playdate so it'd be done on a simulator

@Kiwitime04 You are absolutely right! (I should practice stating my intentions more clearly)
I plan on adding various stuff flying around - coming from both left and right and up and down - which should make it more obvious to fly around to both sides. I do like having the space lord in center, but I will admit that this might just be because of my general tendency to center compositions - but maybe I should play around with moving him to the side, the thought definitely crossed my mind, I like the idea of a hit-box on the spacelord.

I am also trying to figure out if I should force the player to be static or allow moving when firing the laser.

If you're planning on making the asteroids come from all directions, than the Evil dude can probably stay in the middle but limiting the asteroids to the left/bottom/top and giving the dude a hitbox would 100% be interesting.

If you want to stay true to your title, than forcing the ship to be stationary while shooting the laser would be your best bet, that'd make the game much harder.

If you're taking suggestions maybe the Evil dude could do little mini attack sequences at key points in the timer, like at 100 seconds he could try to swat the ship like its an annoying fly for example. Or you could possibly add a difficulty option in the menu that changes asteroid spawn rate and whether you can move.

Kiwi, you are reading my mind, the original idea actually was that you where a fly trying to land on his eye, but I felt putting him in space added some scale that I really liked - so yeah 100 on the swap idea

time will tell if I will ever make that work. It is such a crawl for me adding even the simplest things atm. Learning something with every new element.

Haven't made much process, been too busy to work on it, but I have progressed a bit:

I have hit a bit of a problem with collisions, tried to elaborate on it here:

Running on both the playdate and on the mac simulator I am experiencing some unpredictable collision behaviour, and at this point i don't really know what the course is. Here in the first gif I hit the meteor but it does not trigger the health bar: [EvilSpaceLordWeirdCollisionStuff_002] Here is a couple of situations where sometimes it works, sometimes it does not: [EvilSpaceLordWeirdCollisionStuff_001] I have tried various things, but I also don't have a very good understanding of how this…

Also right now the game is mega easy, so I need to add that big sweep from evil space lord and some energy waves that can damage the ship as well.

This is sublime! Really like the looks of it!

Thanks a bunch Will! Now I "just" have to make it fun to play as well.