HI,
Iv been working on a Hurdy Gurdy app for playdate
been working with Sam Wain to get some good sounding gurdy string sounds
heres a video of it in action. I built it by having all the note loops loaded on init then set there volume to 0. from there i set the note value to the rate of change of the crank and if a button is pressed. Key things,
-usualy 1 melody string active at a time.
-drone string, like the bagpipes, just drones in the bg
-trumpet string, a percusive elemetn that onyl activates if the crank moves quickly

Just gona leave this bit of code here too
checks if nothing is being pressed
playdate.getButtonState() == 0

You can toggle the drone and trumpet strings in the menu at the momeetn and i hope to add
-more scales
-trumpet threshold
-transpose (this is in code just need to link to menu)
-choice of skins, add a few different looks to the gurdy

then should probubly save all that and let u reset it too.

Neat! Sounds pretty authentic to me!

Hmm interesting, could be worth a try but think it could be aquard to play. I was gona add a slight delat to jumping back to open g, hopefuly that will stopit jumping back or some kinda reset on crank stop.

The dealy idea would make songs like thunder struck not work but most other would. So could have that ad a toggle depending i. The song your trying to play.

It's fun thinking about how to more with limited controls!

Can't wait for this app!

Im trying to get an options menu working.
Iv got the basics working from this tutorial this always shows off on the label 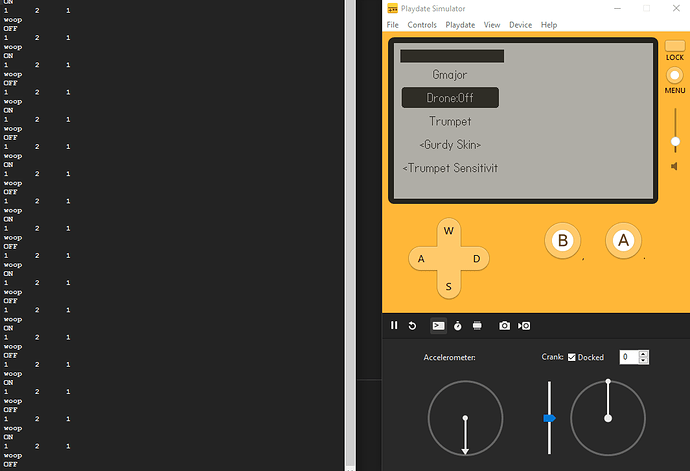 Is this what you need?

then never actualy setting the list = to new values,
I made a function that just calls that again and added it to my button input code, still didint update instantly it waited till the next grid view needs update, ie if i move up or down

so for the meantime i just comented out the stuff that makes the lst only draw when it needs to.
whitch on device realy seems to tank the cpu but its just in the menu so not to botherd for now, il fix it later 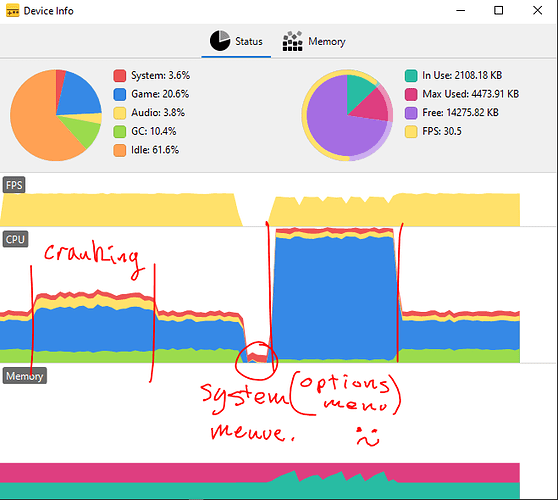 i I did also make this features video for tiktok and twitter yesterday, gettingprity close to done i think 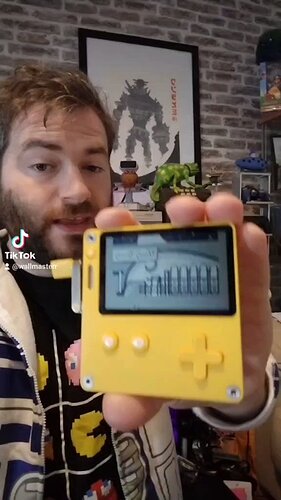 I added a tweekable dealy setting for jumping back to the open g string. but that make me realise i probubly need a tail off period for all the notes as they stop abrubptly. also an overide to play the open g ifu stop cranking quickly then crank

been a while since i updated this.

I also added a couple of requested features,
U can now chose the point where the acceleromiter decided where to switch to the high octave string and whitch axis it uses in the options menu. 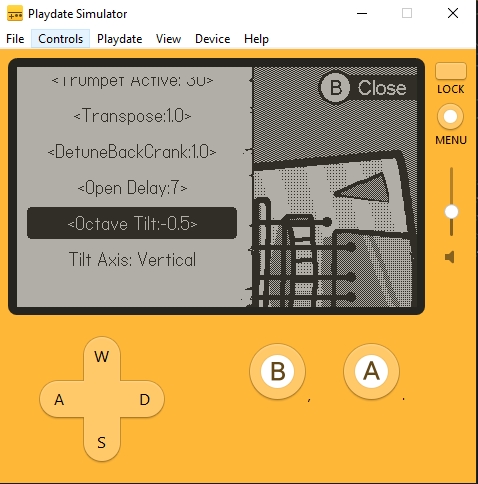 last thing to figure out is how to add more scales, Not sur the way iv built it so far is rubust enough to do this withoght a lot of copy pasting which could cause troubles when updating in future but if it works noone needs to know and future me can deal with the ramifications.

I was getting anoyed having to bring up the system menu to get into options all the time so added a shortcut to get there when u dock the crank
still need to make it not auto boot back to menu when u press b, would kinda like a crank was just docked function call

FWIW, playdate.crankDocked() is called on docking, if you want to define it.

And better yet, input handlers can include crankDocked = function() even though that's currently missing from the input handler docs. I have used this successfully in my Playtime clock app.

(In both cases, crankUndocked works too.)

Im having a weird issue where some of the menu options are effecting others. the menu i still tanking performance when active
heres a gif. it changes the skin when i click the scale.
as far as i can see in the code they are completely unlinked and the gridvidew seems to know what option its on. Sometimes the maj minor images get broken too and ether overlap or go missing.

I was wondering weather things could be getting garbled coz the cpu usage is high when menu is open or weather its likely something else?

Ok figured it out finally,
I was using the name hgSprite for both the major info sprite and the bg sprites. Think its all good now

Its out now on itch 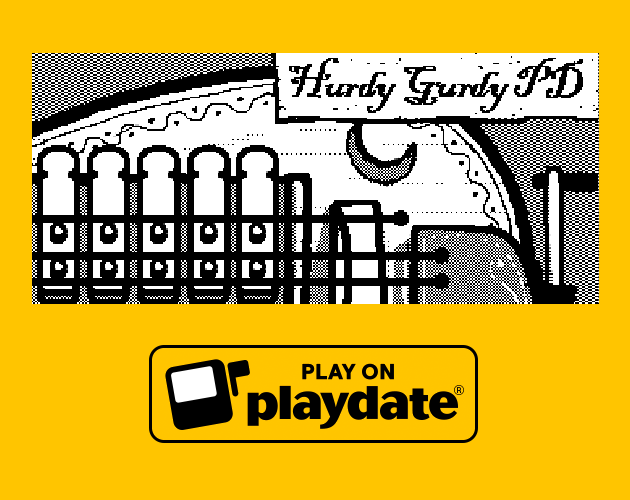 Bought it! I like it! (And I love the visual styles of your instruments!) Just one thing: I was confused when I opened the app because I wanted to close the options menu with B, but it kept opening again. Turns out I had the crank docked and needed to undock it. Not sure if this is intentional?

Thanks, yip i know thats a thing just didint fix it. A couple peopl have mentioned it too. Il try to get a patch out soon.