Well I had high ambitions for having a full game, or at least a much more complete demo... but ahead of the SDK release I wanted to at least share a PDX folks can try

Last time I worked on this I got map loading via .json files generated from LDTK; which is a pretty great editor for wolf-style games, if you twist it a bit.

I'll update this thread if I get more going. PDX built from the linux SDK. Note the demo has a different map than the gif above, and I also inverted the colors by accident, heh.

Seeing about 40fps or high 30s on device over here.

huh. I'm getting an error when trying to load in the simulator :-/ 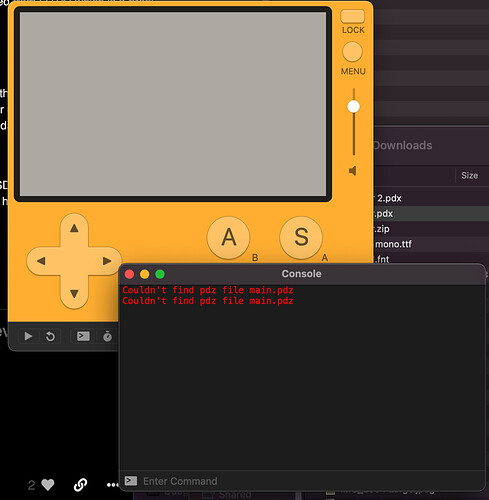 I was excited to try this

Well you build the whole in C right? when you develop on Linux so when you built the game for the simulator it probably build a .so file which is not compatible with macOS.
For a game to be playable on all platform in the simulator you would need to build it for Windows, Linux and Mac. Not impossible just very impractical.

I realized this right after closing my laptop... the error message is different than before and I wasn't paying attention, heh. The game used to run via lua calling C functions but I removed lua entirely recently while trying to slim out a few more % of performance. So now instead of a weird lua error it complains about pdz I guess.

I don't have a mac to compile it on, unfortunately