Hello! Last month it came to my attention that no music players existed for the Playdate (there is Audition, but it's not made to be a music player). This didn't make sense to me, so I decided to create my own!

Introducing musik, a little music player for the Playdate! (Well, it's been around for a while but I just released a new version so... mainly just spreading the word

Some screenshots for your viewing "pleasure": 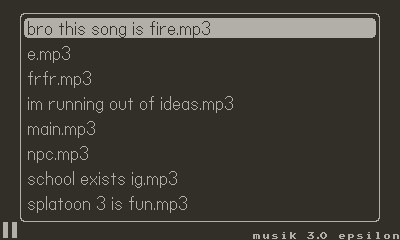 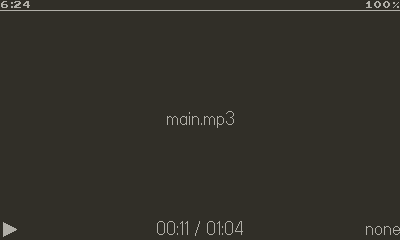 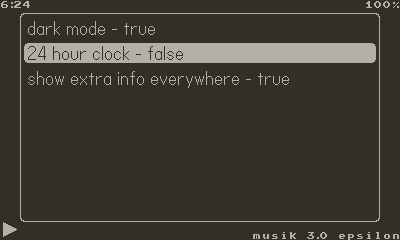 More information can be found on the itch.io page, and as always it's open source and on GitHub!

AWESOME! Do you have any plans on being able to stream Internet Radio stations that run off Icecast or Shoutcast? Me and my friends run a station called www.8k.nz and I'd love to be able to stream it on my Playdate when it arrives. Here's an example of the stream: http://radio8k.out.airtime.pro:8000/radio8k_a.m3u

Actually, this sounds really cool! I may be able to implement this once Panic releases networking functions, so once they do I'll see if I can add this as a feature.

Thanks so much!! You're a boss!

Really love this, such a good idea! Most of my music is in .wav is there any chance of this app being able to support that or will I need to downgrade it to .mp3 for it to play?

Also, does the Playboy automatically pause any app when locked or is that possible to get around bc I think it'd be good if you can lock the Playboy while still listening to music so that I dont accidentally press any buttons

To answer your .wav question, yes, you will have to downgrade to mp3 for musik to play your music. This is mainly because I'm using Playdate SDK built-in functions to handle the audio, so unless Panic adds .wav support you will have to use mp3s.

The Playdate does automatically pause the app when locked. I don't think there's a way to get around this yet, but when there is I'll be sure to implement it!

Could a lock feature in the menu that requires the user to press the same button 3 times in a row to be unlocked be possible? It could also help with the battery consumption if only minutely since it'd reduce the screen updating.

Sorry if my suggestions are unwanted, I'm just a big fan of music players and want this to be the best it could be. I'm also useless when it comes to coding so if anything I say is too difficult please just tell me outright.

No, no, this idea makes perfect sense! I could totally implement this, just give me a day or two. I'll let you know if it will take longer than that to add.

there is Audition, but it's not made to be a music player

Audition is made to be a music, sound, graphics and animation player

Well, I meant a music player in the sense that it can shuffle/loop songs, kind of like an iPod.

Sorry if this came off as rude or disrespectful, I love Audition

Not at all! A more fully featured music player is a good app to make.

Hey @Kiwitime04! Sorry for taking forever to publish the update, but I added your lock screen idea! Thanks for your suggestion!

I have just released version 4.0 of musik! This will be the last major musik update for a while, but I will still be taking requests and fixing bugs.

With the option to change screen roundness, is there anyway to reduce the number? Mine is currently sat at 1131 and I don't know when it'll max out

I just released a new version that fixes that! When you click on that option again it should loop back around to 1.