Peanut-GB, a Playdate port of an open-source Gameboy emulator

I just released my port of Peanut-GB, which is an open source C Gameboy emulator made by deltabeard. I have tried to optimize it as much as I can, but performance is still only around 20-30 fps. This unfortunately means most games will be playing in slow-mo. I don't have any experience developing emulators, so I am limited with how much optimization I can do to the actual emulation code. So if anyone else wants to take a crack at improving performance, that would be great.

The emulator has audio support, save support, and a rom picker. It technically only supports original Gameboy games, so your mileage may vary when trying out roms. 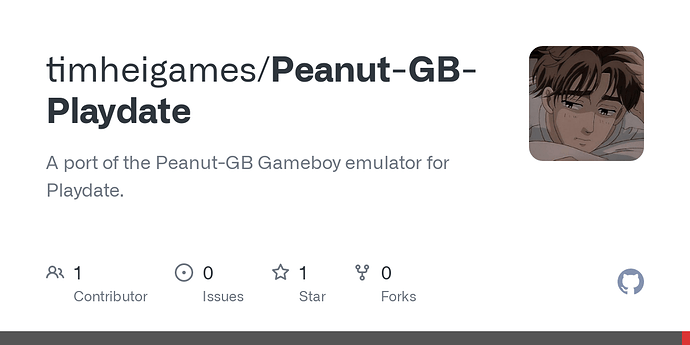 I sideloaded this on my playdate and was able to run the 5 or so gameboy games I tested. Although they weren't playable, (getting under 5fps majority of the time), it was still pretty impressive and cool to see it handling it. Awesome work!

I released a new version which should be much less buggy. Some of the changes I made to the original emulator code seems to have messed a lot of things up, so I reverted everything back to the original Peanut-GB code.

I tried the 1.1 version you uploaded and it does seem to be more accurate and consistent. The framerates and slowdowns aren't ideal atm but those were expected. I was not getting the same graphical glitch anymore in pokemon blue and it booted smoother with about 5+ more fps. Can't wait to see where this goes, gb games look great on the playdate screen

great work
I tested a bunch of GBstudio games on this and all run fine but slow. Also tried From below pocket whitch ran fine if u turned the sounds down.

I am really exited to see this evolve. I would love to use it to pack gbstudio games in a wrapper and see some of those games relesed on the playdate. Gb studio seems both easyer to use and more fluid in gameplay.