I updated to 1.10 over wifi on the device itself and it's been stuck on the 'PlayDate' boot logo since. 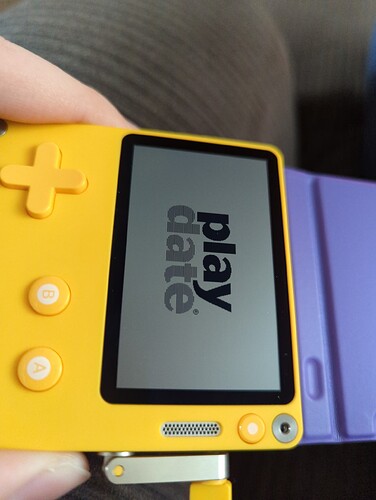 Sometimes it flashes the 'charge me' image of a usb and battery, but I've had this thing plugged in for hours to make sure it's charged. I have tried the reset button. Sometimes when it is plugged in it gets confused saying it's sharing media, with a green power light, the same as when I would plug it in to sideload a game.

Tagging @arisa as suggested by @matt but I don't see the small mail icon next to your name to DM you.

<Update 7:05PM PST>
I recently got it to say 'sharing BOOT segment as USB drive'. When I plug it into my PC, it has the following files in it:

<Update 7:38 PM PST>
and.... now after resetting while it was plugged into my PC it gives me 'sharing DATA segment as USB drive'.

Is there a crashlog.txt or errorlog.txt file on the DATA disk? When it's stuck on the logo screen, is the lock button LED on?

I'm really at a loss to what might have happened here.

Hopefully we can dig up some more data.

Is there a crashlog.txt or errorlog.txt file on the DATA disk?

There is no crashlog.txt, but there is an errorlog.txt, but it seems to be irrelevant issues I had with Casual Birder long before this happened. Sharing anyway:

When it's stuck on the logo screen, is the lock button LED on?

Not a dev, but I have a theory. Have you considered performing these steps to put your Playdate into the DATA as USB drive mode, then copying the files to the Disk folder of a Playdate SDK install? In theory, you could then fire up the sim to see if it works there.

I just noticed that I get a quick flashing red light on the lock button every 8 seconds.

This was a cool suggestion! All my stuff loads fine in SDK when I do this, so that makes me concerned it's probably something wrong in BOOT, which I cannot find any samples of what that is supposed to look like...

That's... interesting, and worrying. I don't own a Playdate, but might get one soon. I'll let you know what BOOT looks like when I do.

Edit: Just to clarify: When I said that was "worrying" I meant that looking at your boot folder which (except for what seems to be macOS metadata) is empty.

I'm seeing the same behavior on my new playdate that arrived two days ago. I saw in another thread that someone had to get a new firmware image from one of the devs. My BOOT segment has only the files you mention above, but DATA looks alright (I see directories for the first two games) and I don't have any error logs that I can find.

I have good news! After contacting playdate support they shared with me a file titled PDFW. Adding that to my device after connecting it via BOOT mode (clicking reset found inside the crank doc 3 times) allowed my device to update and operate normally.

A quick note: the BOOT disk (BOOTSY) should be empty (except for those dot files which keep macOS from doing dumb things with the disk like running Spotlight on it). It's used for emergency firmware repair like this, and the system deletes the file on success.

Any update on whether the firmware image is device-specific? It's been almost two weeks, and I still haven't been able to use mine. I'm just waiting for somebody to send me an image so I can try this.

Update from my end: I heard back from one of the devs, and while the firmware image doesn't sound device-specific, it's also not something they want to get passed around.

Hello, same here with my brand new public Playdate. I got it into this state during the initial device setup flow, right after the OTA firmware update to 1.12.3.
Symptoms: boots right into the playdate logo and stays there, with the lock LED flashing. Paperclip reset doesn't solve it. The device boots fine in BOOT and DATA modes. There's a version.txt file in BOOT which contains this line:

Can someone please help me? I've contacted support a few days ago but haven't heard back yet.

One hypothesis of what could've gone wrong: When I proceeded to update the Playdate, it stopped in the middle and asked me to charge the device up to 25% before continuing. I plugged it in, then the update completed shortly after, then it got stuck in the Playdate. The battery state interruption might've corrupted something.

Folks with stuck devices; please contact our support team directly and they'll guide you through recovering your device.