Problem is, how do we deal with separate librairies needing, for example, frame timers to be updated but we want to make sure that it's not called twice?

We could manage all this in the main code, but that's rather fragile (i.e. if you forget to add the call to playdate.frameTimer.updateTimers() then the libraries don't work properly).

Other problem is librairies might have things that they want to update in there too, so those libraries expose an update() method that the user needs to remember to call otherwise the library doesn't work.

That sounds cleaner to me but maybe I'm missing something obvious that's already there?

I wrote this quickly today. Still curious if there is an easier way I've missed but for the time being it lets me cleanly and automatically handle playdate.update() between all dependencies. 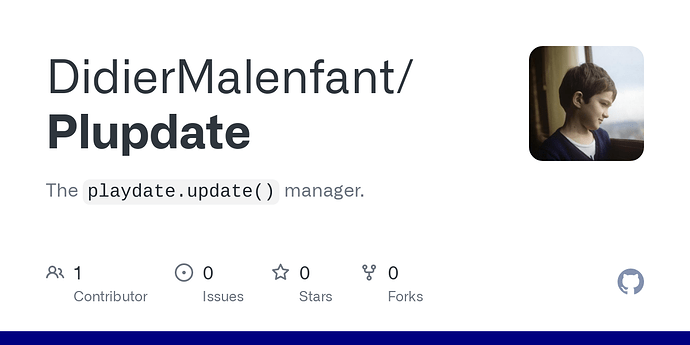 The `playdate.update()` manager. Contribute to DidierMalenfant/Plupdate development by creating an account on GitHub.