Playwrite: a hack to turn the Playdate into a typewriter (and use USB controllers with the console)

So It's very hacky and probably a bit off topic but I wanted to share this fun project I worked on, I called it Playwrite. It's a combination of a custom made, Teensy (Arduino compatible microcontroller) based dock and bespoke Lua "game".

It turns the Playdate into a retro typewriter The 3D printed dock uses USB serial to proxy inputs from a USB keyboard (here the mechanical Logitech POP Keys which is just perfect for the job). Arrow keys, Enter and Escape are directly mapped to the directions, A and B buttons respectively (and so are the A and S keys when not in the dedicated Playwrite game). So the keyboard can be used anywhere in the OS or in games that don't rely on the crank (not because it's unusable; but because it's just not convenient).

Then for the Playwrite app, I'm encoding keyspresses for the rest of the keys as crankchange angles in the dock and decoding them back to chars in the app. The rest is basically a text editor manipulating a Lua table. You can then export your prose to a .txt in the data directory. 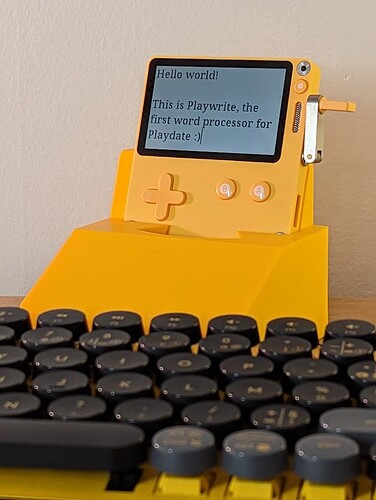 It also works with gamepads, which might arguably be more useful

I could probably map the right analog stick to the crank; haven't tried that yet. 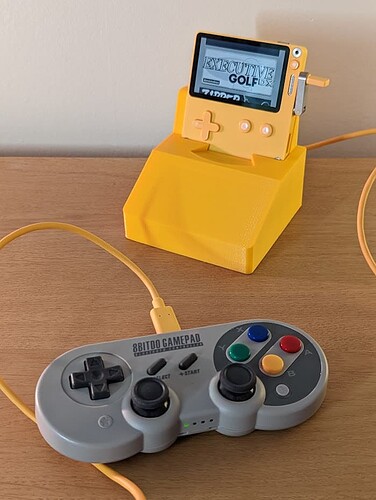 PS: they aren't available yet but I plan on sharing the sources as well if anyone's interested.

Edit: now with documentation and pictures

This is really brilliant. I always wanted an e-ink typwriter display, and this is even better.

Maybe start selling units on etsy? I'd be interested.

If some entrepreneur wants to run with that idea, it looks like the dock is released under the MIT license.

Note that the freewrite sells for over $600 and sells like hotcakes:
https://www.amazon.com/dp/B09V37Q6GP?tag=relibrar-20&linkCode=osi&th=1&psc=1

This is nice because people can choose the keyboard they like.

Haha thanks. I didn't know about freewrite before doing this project but it sure looks similar. A foldable/portable version of the Playwrite dock is certainly doable and with a bit of software development would come fairly close. @dave told me that it should also eventually become much simpler to send data to the playdate via serial, making my hack obsolete and most importantly the data transmission faster and more reliable.

So yeah, I'm not going to start a business but a v2 of this dock is certainly within reach and could bring us close to the freewrite use case, along with better external controller support.