Plordle: yet another Wordle clone

I wanted to try pulp out and I didn’t have a good idea for a game so I thought I’d make a Wordle clone with a very limited Playdate-related vocabulary!

It was really hard and a lot of fun!

The player can only move around the keyboard (and the submit/delete keys below it). This happens via calls to adjustHorizontalPosition or adjustVerticalPosition based on event.dx and event.dy within the player’s update event.

These adjustments use goto if the player tries to move outside of the keyboard area to move it back in.

The problem is that goto triggers an update call, so then I have an update call inside an update call and I need to ignore one of them to avoid running the same side effects twice (and avoid an infinite loop). This was the first bit of logic I wrote and I think I could have done it better.

The keyboard tiles have two frames: one for their regular appearance and one for the selected appearance (which is pretty much the same but with inverted colors). They have fps = 0 so that they don’t flicker all the time.

The keyboard tiles themselves don’t actually switch between the frames: the player swaps to them when it “visits” their tile:

(This is in the player’s update event)

Each grid square is made up of four tiles (top left, top right, bottom left, bottom right). Each square can have six possible states: 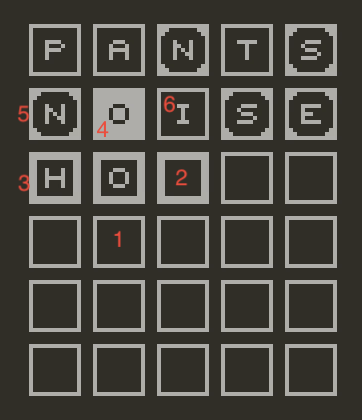 I manually switch between them using

Then each of the last four cases is handled with a different tile. Cases 4-6 are where the flipping animation happens, which I trigger using

This allows me to only play the flipping animation once.

However, since each letter is split in four this allows for some optimization. Here’s what the four A tiles look like: 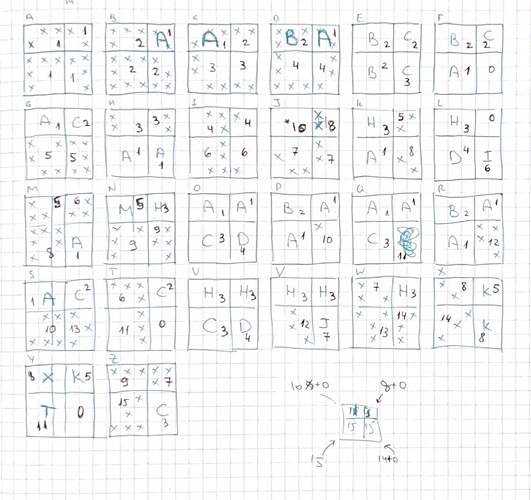 and then similarly when it's time to flip the grid squares to show the hints (hint = hit/present/miss) I do a similar swap for tiles named topLeft 0 hit, topLeft 0 present, topLeft 0 miss, etc. and the code for that is

I made a separate test room to make sure I hooked everything up correctly. I gave the tiles a low fps initially to make them easier to debug, and then once I was happy with them I edited the json file to raise the fps on all the tiles at once. This made the test room unbearable because everything is moving around super fast.

Here's a frame from the test room close to the end of the flipping animation cycle: 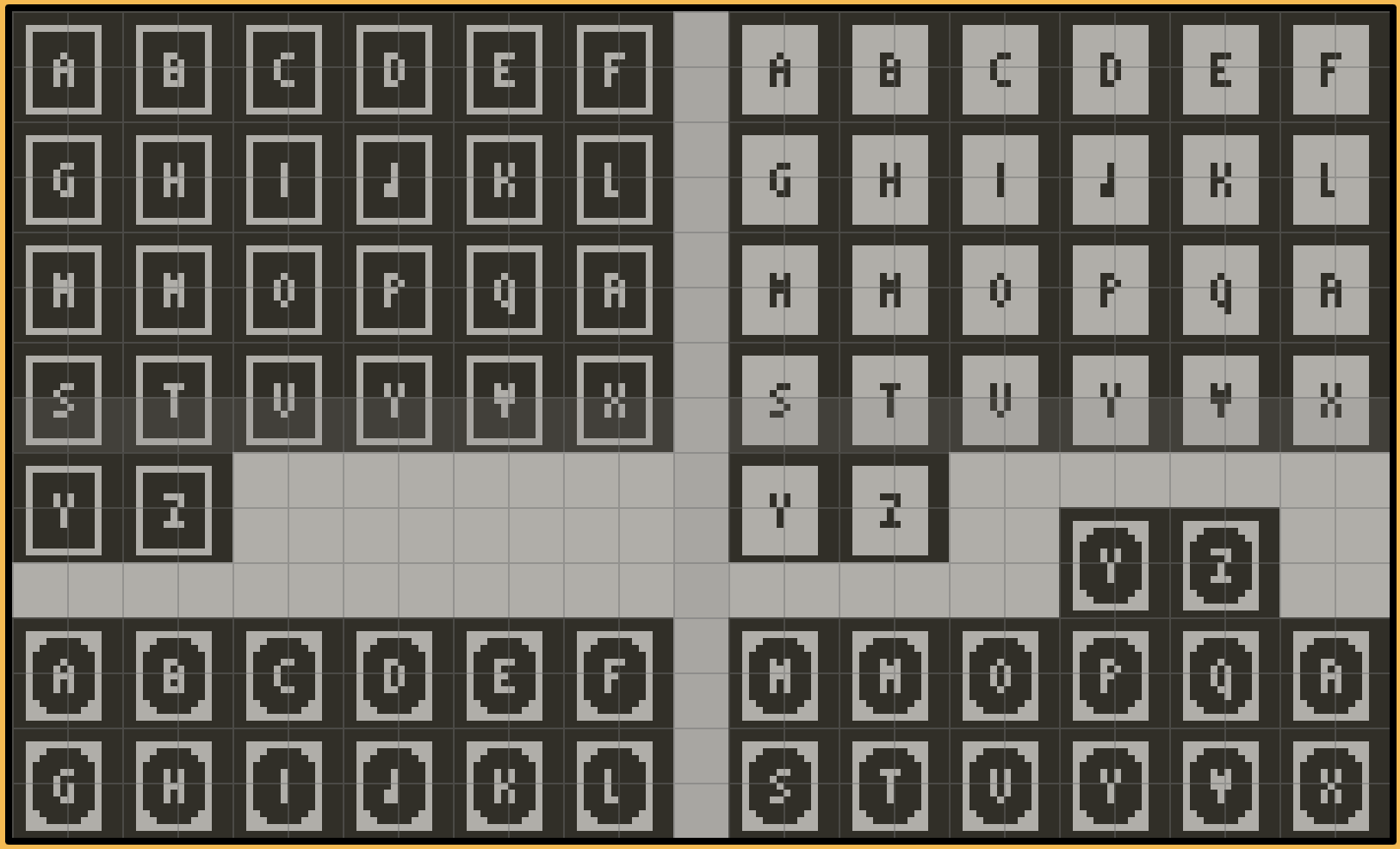 There are no arrays in pulpscript, which meant I had to write some ugly code. Here are the arrays I hoped to use in the game:

I came up with two possible solutions:

By "using tiles" I mean storing data in tiles that are visually blank but whose names are valuable. Here's an example:

You can do the same for arrays of numbers using frames:

I decided not go with this approach, but the Wordle clone that @ethan made uses tiles to store the word list and that seems really cool!

In the end I went with a bunch of long if statements, like those in the tile mapping from the "Too many tiles!" section above.

The way I pick a goal word is again using a massive if statement:

I put the code for goal word selection in a separate sprite called wordPicker so that if someone wants to make a clone of this game and use a different set of words they'd only need to change this specific part of the game.

The wordPicker tile is blank and sits in the top right corner of the room.

If you want to use this game with a different set of goal words you can use the python script in the files section above to generate the script for wordPicker.

You'll need to edit the words array on line 3 and then run it in the terminal. It will print out the code you need to put in the wordPicker script.

If you're on a Mac you can put the output in your clipboard using:

and then paste it in the pulp editor.

This is a tile that deals with grid-square events. I called it columnBoy because I didn't want to call it columnManager and I was too tired to think of something that makes sense.

columnBoy is an item tile (so that it can have events). it's visually blank and there are five of them in the room: one for each column. 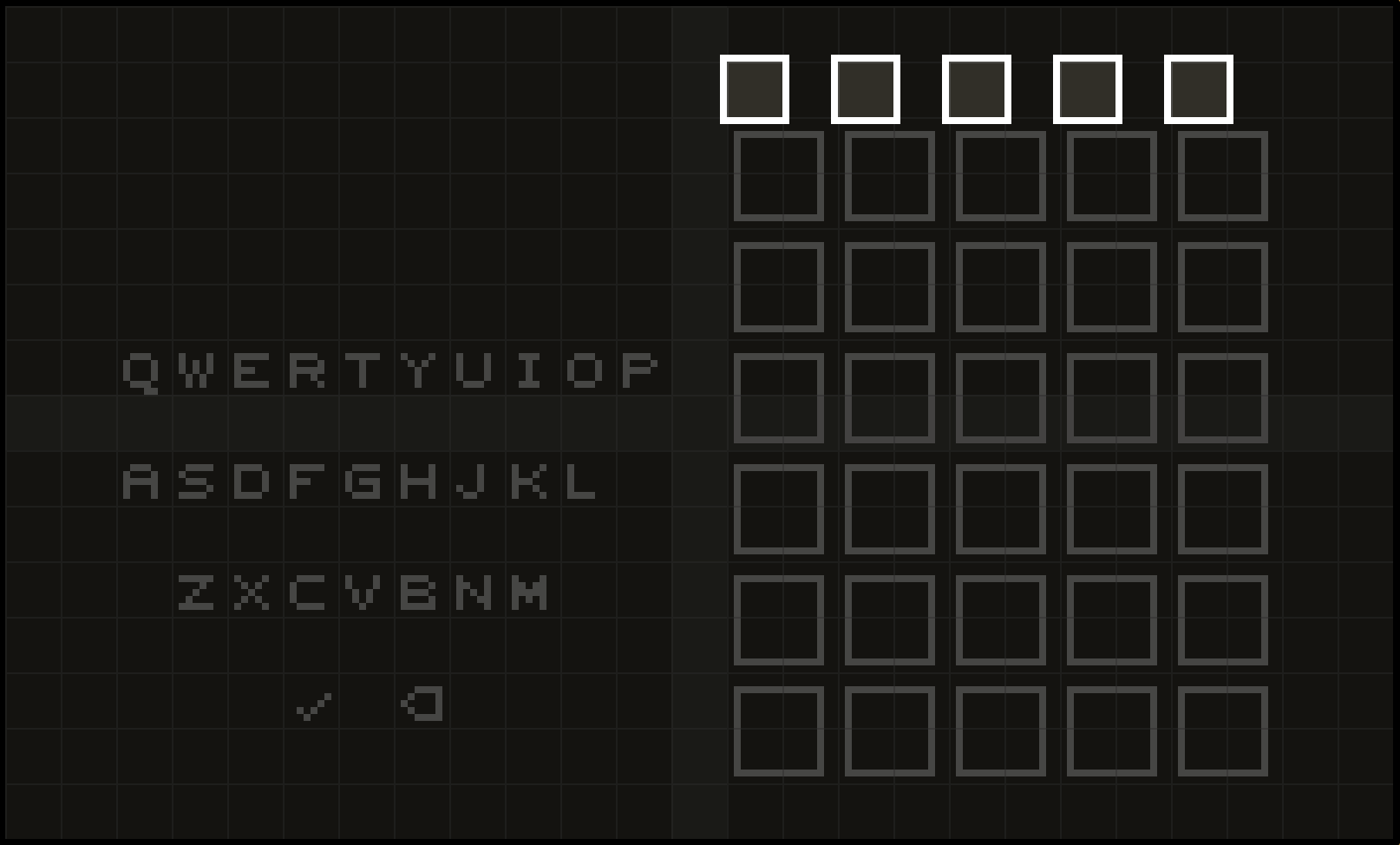 columnBoy has events like focus, unfocus, enterLetter and flip. These are all events that I could have put in the room script, but I didn't want to put all of the game logic in one massive file.

The interesting bit of columnBoy is the flip event: it calculates the right hint for the grid square, switches the tiles to the appropriate animation, then waits a bit and calls the flip event for the next columnBoy. It also checks if it's the last column, in which case it tells the room that all hints have been revealed so that the game can proceed.

I used some custom events as functions that run complicated logic that's used in a bunch of events. I named these calculate[SOMETHING], for example calculateLetterCoordinates or calculateHint.
In order to avoid accidentally changing their inputs/outputs I used a little prefix for them: c_letter, g_guessLetterIndex, etc.
The first letter prefix specifies the entity that uses that variable (g = gameRoom, c = columnBoy).

Wow, love the polish of the animations and very cool to see the different approach used!

The dictionary problem for identifying real words does seem tricky to do, I also punted on it.

Hey, this was a lot of fun! i was watching tv with my wife and started asking her "what's a five letter word, choose all different letters" and she totally got into it and took the laptop from me to play. Great and unique idea for the playdate. Good luck to you, excited to see more.

The lack of arrays was also something I struggled with. Ethan's Wordle and my NineFind both used the approach of creating Rooms with "variables" in the rooms as a way to get around that, but not sure that's scalable or the best approach

this was fun to play!!