Platform - Pulp WEB environment on Edge, replicated on Chrome and Edge for Android

Explain what the expected result was and what happened instead.
I implemented a very large art piece with dozens of variations and exceeded the total frame allotment for a pulp project, as far as I can tell. This surfaced when I tried to download the PDX for device testing. 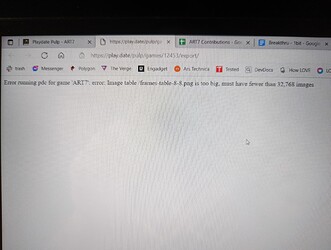 This happened 6/23/2022. I removed the most recent piece with the massive number of variations to reduce frame count (I estimate the piece added some 18-20k frames to the project, contained within a number of sprite tiles that would be randomized on room entry.) Using my method to tile artwork described here:

I have used somewhere in the neighborhood of 20k frames in sprites to draw art in rooms for ART7 1-bit Gallery With the large piece, I apparently hit a limit of which the community has been unaware

Now the Actual bug or at least unexplained case is that when I removed the art piece with the large amount of frames, the PDX still would not download. I was fairly sure I had brought the game back down below the limit, but couldn't get anywhere.

I was however able to export a JSON and dug through to investigate. It appears that the offending frames were removed but the frame count in the JSON makes a Large jump to overlimit - from 21562 to 39098 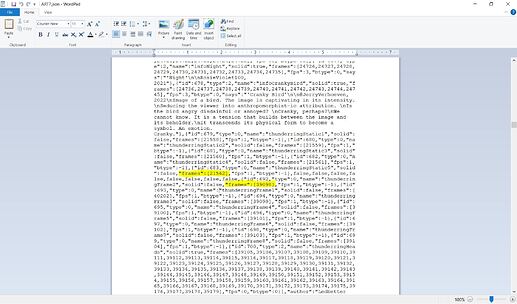 My supposition is that either those frames are still represented somewhere in the JSON or there was a bug causing that count not to reset after the offending tiles were deleted. It's possible that if I waited, some garbage collection would happen on the backend? We don't have a lot of insight into how pulp works server-side so far as I know.

Now as of tonight, I have imported the data.json from a previous download a few days ago and have recreated the work with A LOT of trimming. We were not aware of the frame limitation, so I had been operating without heed to it. So I'm good.

I'm mostly posting to let people know it is possible to get a little too aggressive with aspects of Pulp, and to ask if there is a system in place that takes this into account or if it sounds like a genuine bug?