EDIT: Beta 2 is posted below

This is my "learn the Playdate SDK" game that I plan on releasing as a pay-what-you want on itch- would love feedback on gameplay/feel, especially if anyone has access to hardware- a particular concern is around the scale of cards etc. 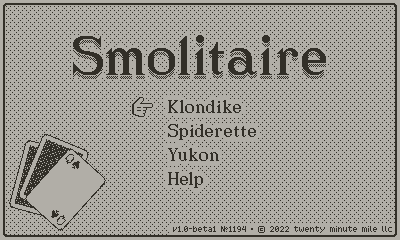 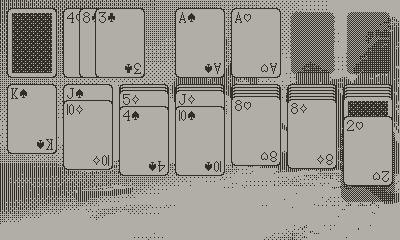 I was thinking of making a toolkit for devs to make card games, would you be interested in doing that sort of thing? Classic card games are a great fit for the playdate I think!

This is a great start! I love the look and feel of the game. My biggest request would be to be able to grab a stack of cards (i.e. to put a White Q with a Black J, White 10 and so on...) on a Black K, and be able to move that stack around to get to the cards underneath. If that is already a feature, it's not working for me. I messed with the crank function for minutes and it did nothing.

EDIT: Well, I'm a moron. Pressing A multiple times will pick up the card stack, one card at a time. Forget what I mentioned above. The statement below still stands.

Nonetheless, THIS is DEFINITELY a project I'll be following.

Not at all! it sounds like I can make the controls more discoverable. right now, the crank is only used for situations when you just need to move a bunch of revealed cards up to their foundation piles, but adding crank support for picking up multiple cards would also be fun!

I wound up making a bunch of helper functions for moving cards around and managing the deck etc, so even if I don't end up making a full toolkit, I could 100% open-source those helpers if others found them useful.

That would be wonderful. At the absolute least, maybe make it a little clearer about using that A button to grab stacks. Other than this, All I could consider adding is some nice card sound effects. Other than that, this is brilliant.

Haven't tried the pdx yet but could you hold A to pick up a whole stack at once for bigger stacks as a shortcut?

yep! you can tap A to add individual cards to your hand, or hold A to add the whole stack.

Cool! I used to really enjoy Solitaire on my little old iPod.

Maybe you could double or triple the size of the suit symbols and the numbers? (With thicker strokes?) That could make it more playable in low light, or when jostling around—or for people like me who get lazy and won't wear their glasses

Huh, I'll try that. Thanks for the clarification. You're saving my thumb so many button presses.

This is great! Really well executed, and the animations are super playful. I especially love the hovering and "hold to undo" animations. It's definitely been a good idle time-spender since you posted it.

I've just been playing in the sim. I've got a few bugs/suggestions:

@downie this is all excellent feedback!

gonna work on larger suits/ranks tonight, worried about how readable it will be when they're stacked but it'll be worth it (the perils of not having hardware yet!)

Cool! I can see the challenge in finding that balance. Maybe you can reclaim some empty vertical height in the layout, plus allow the bigger symbols to be hidden just a bit by the cards on top... and it might all still fit?

Looking forward to the next build! It's a simple game, but with enough work, you might just have a hit on your hands with this one!

If I could ask for one thing in the next build, it would be some card sounds. I've been spending A LOT of time playing this and would love to hear some card sounds so it's not totally silent. But hey, do what you want! Still very excited nonetheless!

Hello all- thanks for the feedback, and I'm back with beta 2! 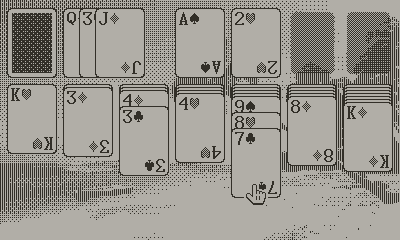 Wow! A collection of Solitaire game for the Playdate. People used to play Solitaire on old Windows PCs you know.

I bumped up the glyph size- there's a new build above and I'd love to see what you think. Here's a screenshot: 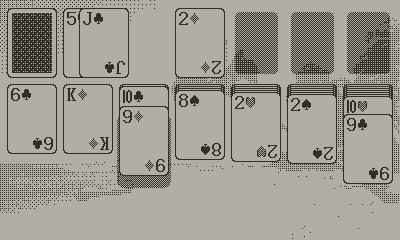 I was one of them!

Looks great! I like the extra dark edge on the heart for contrast—might look good on the diamond too?

Maybe the numbers could be bolder as well. But that’s hypothetical since I don’t have hardware—yet!