In Gravity Express, you battle gravity while transporting cargo through abandoned mines.

To learn more about the game and be notified when the game is released (january 2023), click the 'Follow' button on Gravity Express by Nino [Gravity Express]

Below you will find the devlog, where I will go into technical detail of various aspects of developing this game.

A port of Crazy Gravity Portable I made some 12 years ago in my stereotypical bedroom.
The original game was made for the PlayStation Portable, which had a lively homebrew scene. Only C++ was available as a toolchain, but my game ran in a Lua interpreter. It achieved some 20fps.

With the original system having a resolution of 480x272, porting is a matter of resizing the viewport, replacing all the game engine calls and converting the sprites to 1-bit. I also found out that not all Lua functions are available, but found a way to probably repackage and load level files faster than before. Thanks @Nic

I used Canvas Dither to convert the colored sprite to 1-bit using atkinson. Still thinking about how to translate the color-coded gate keys to this platform

I would love to see this being played on hardware, plz post a video The game runs a bit slow on the device (around 14fps) but all works pretty nicely.

Great, thanks. There is ample room for optimization, so no worries. Worst case I'll aim for a solid 20fps, since that is the original speed. Somewhat surprised to not see the framerate go up when there is no sound playing, as the docs warn that's heavy on cpu.

This is a lovely surprise as I really enjoy this type of game.

I think current rendering can be optimised, but given that you are scrolling the whole screen partial redraws will not be as effective as you might hope. One of those things that need to be tried to see.

The way I would proceed would be to render the screen to a sprite to see if the SDK sprite system gives any quick gains. It will get better, but by how much is the question.

The best way would probably be to use the SDK tile map and sprites, but that sounds like a rather large rewrite of what you have already. it plays OK at 14fps, but it would play amazing at 30fps+.

Next I would aim to reduce the flickering (pixels that change every frame) by using careful sprite work to make sure shading and dithering align to an odd (or even) pixel grid - rather than random like Atkinson - and scrolling in multiples of 2 to align the scrolling with the dither pattern. This will reduce the amount of pixels changing every frame. Visually, it will look better on device. Whether it results in performance improvement I am not sure as the device sends dirty rows to the screen rather than dirty pixels. But, again, it cannot hurt. Preventing dither flashing/flickering on moving objects by snapping to even pixels

Sampler says this is where it is spending time:

I saw in another thread that you dabbled with optimizing the game. I always appreciate pull requests on github

Even though it's silly to optimize without owning the hardware, I still liked it as a weekend challenge. My approach:

IF the camera moved over a full tile:

These changes seem to be massive in the profiler on Mac. Would love to see another profiler screenshot and fps count from real hardware @matt

I'm getting 30fps (with occasional dips to 24) from that build, which looks fantastic. I'm assuming collisions were turned off on purpose?

Building the latest source myself with a new fps of 25 gives a solid 25fps 98% of the time.

The optimisations I made were only math/Lua quick tricks, but because this was so bound by drawing they were not noticeable. 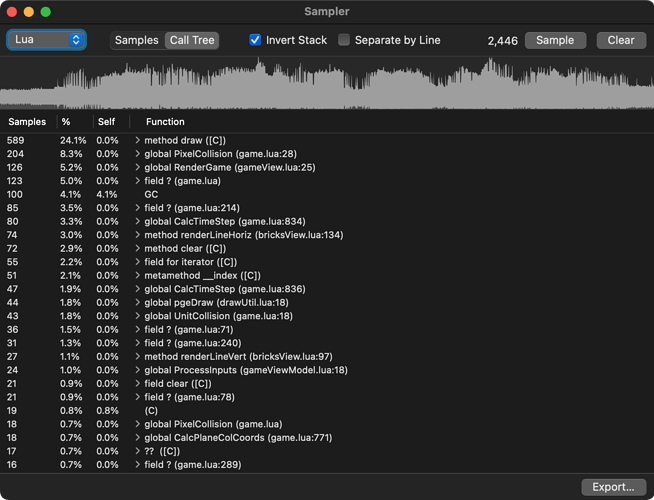 Thanks, that's great news. So the 20fps target is achieved

and the the 30fps may be in reach. Note that the level 03 that gets loaded by default might be the heaviest, along with 10.

It really doesn't make sense for me to do this work, since I cannot profile on my own. So if anyone wants a challenge: have at it and create a pull request

Is there a way to drill down in the profiler, like only keep the samples for the 10% slowest frames or even better: the frames where the target was not achieved?

@kyle yes the collisions are disabled in debug mode. Compile from source to tweak the variables

Is there a way to drill down in the profiler, like only keep the samples for the 10% slowest frames or even better: the frames where the target was not achieved?

I don't think so, but it's a good feature request.

You could export the samples and do some analytics on them, but realtime view: currently no.

Another performance update (I hope).

First, there's a Lua crash when I run out of lives.

That makes me really happy @matt , thanks so much!

Don't tempt me! I spent a bit more time already, and if 40 is the max right now, a solid 40 would be very difficult. Also, the game physics is frame-based, not time based. So increasing fps would require re-tuning physics etc. Also, we humans are very accustomed to 30, 40 might feel weird. In addition, pushing the display past it's recommended fps might introduce ghosting or whatever.

I'd expect the scrolling to continue and the craft to explode dramatically into pieces or particles or something?

YES. I know the collision point, so could break up the sprite at that point and animate some parts to continue their momentum. This could be very cool.

Yeah, You'll get used to it, but I don't want to set a bad first impression. I'll revert the landing tolerance to the previous value

Which gets compiled into binary lua by pdc. Note that it's very inefficient: most numbers could have been 8-bit, but lua only has 32-bit numbers. level 3 takes about 7MB of ram. Im thinking about a feature request for a more efficient playdate-level-format which can be loaded with a progress update callback

I knew about it, will look into it further

Weird, is this not picked up?

Best of Both. Manual cut and paste of atkinson as base + the bits from others where atkinson looks bad

pushing the display past it's recommended fps might introduce ghosting or whatever.

Weird, is this not picked up?

It's not. Sorry for my assumption. I'll check if it's not a bug of some sort in the launcher.

According to the docs, pdxinfo is only read by the system, not displayed to the user in the launcher.
In the meantime, I did make a simple card though.

Had a blast implementing a nice explosion effect, thanks for the inspiration @matt

Hope the framerate is not too terrible, but maybe I could sell it as a slow-mo crash cam?

level loading should be quite a bit faster.
simple game card
converted some globals into locals for performance
changed some 2-bit images to 1-bit. Perhaps it'll improve performance

Up next
Game Over screen
Level Select screen 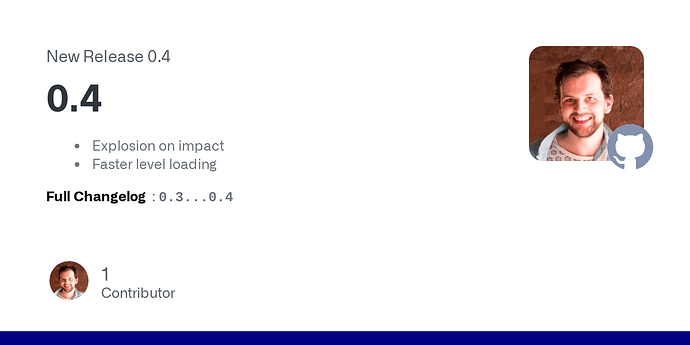 Figured the plane looks like a cursor, and thought of this approach to a Start Screen, which gets the player familiar with the physics as well

Button gets activated when it fills up completely

This is giving me Sub-Terrania vibes and I love that. Also the thruster sounds like the jetpack in Club Penguin so you get bonus points for that.

Two thumbs up. Love it.

Thanks @naltohq !. Do you maybe have suggestion for a new name for this game? Post them here: Name this game: futuristic rocket transport platformer