How much text fits in textbox?

I am creating a reusable textbox. I got started with the supplied typewriter.lua by Neven Mrgn to write text to a sprite. I am not now trying to determine the amount of text that fits within the gfx.drawTextInRect allowing for pageup and pagedown functionality. I am using the default font.

I need a little direction on how to accomplish this
Should I be using rect width / font char width * rows? Is font fixed width? if so how to get. it's width?
Alternatively is there a way to determine where the rect is clipping? SDK docs looks like it only tells you it is clipped (true/false). Thanks for looking.

I will soon be facing a similar need: arbitrary text that has to scroll or page. Any recommendations are welcome! As far as I can tell, you can't just get text to auto-wrap as needed within a given width. If I have that right, manual line breaks with \n newline chars will be needed.

Then graphics.getTextSize() can be used to find the width (which you already pretty much know if you manually inserted line breaks) and the height of the entire text block.

You could then take that height and divide it up as needed into "pages," always in multiples of the line height so it cuts cleanly. You'd render the whole text, but reveal only one "page" out of it at a time, in whatever way works with your UI. (I intend to have the entire text block sit behind the rest of my UI, and simply scroll it up and down—probably one line at a time with a little animation—showing through that "window.")

Going further, I might experiment with automatic line breaks: converting spaces to newlines whenever a line goes over a certain width limit.

One approach to that: parse the long text string into a table of words, delimited by the spaces (and maybe other chars). Then rebuild the string word by word from the table. I intend to use graphics.font.getTextWidth() to check each line of text (words after the previous newline) and as soon as the width goes over, don't add the last word. Add a newline before that word instead, and proceed with that word starting the next line. And so forth. 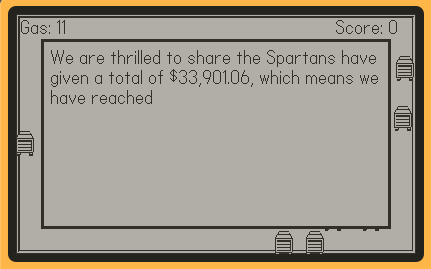 Oh nice! I'll download that to look at how that works.

I had the same issue/requirement (?) a couple of weeks back, I rolled up a solution by first picking an arbitrary width for my text box and then passing my text and that fixed width to playdate.graphics.getTextSizeForMaxWidth.

Tweaked with a bit of fudge and it works a treat.

I think that's all I need too. I'm making a "document" system able to flow text around arbitrary graphics, at least in a primitive way. My built-in help is going to be thorough!

Take a look at this, optimised source included

[IMG_1181] I made a simple text reader for myself, and thought maybe someone else would like it as well, so here you go: Reader.pdx.zip (25.5 KB) Features: -Loads txt-files from the data folder (net.diefonk.Reader) -Scroll with crank or d-pad -Automatically saves your position (on pause/lock/exit) Have the source code and this lightly edited Wikipedia article as a bonus: main.lua.zip (1.5 KB) Magic (supernatural).txt.zip (24.1 KB)