Programming with C on Windows using VSCode and CMake

The SDK for Windows is a little anemic, so I figured this might be useful to anyone trying to figure out how to program in C on Windows. Also, none of this is really Windows only, the modified bits are fixed up to also support Windows properly as well as allow user defined paths for the SDK and toolchain using environment variables.

Don’t forget to escape your back slashes (or use forward slashes) in your paths!! Once that’s done, make a copy of the “c_template” folder and rename it to whatever you’d like. After that, we open VS Code with that copied folder as our workspace. Again, when we open VS Code, it has to have the environment variables setup as above.

Once VS Code opens up, the cmake-tools extension will detect the CMakeLists.txt file, and will ask if you want to configure it. Hit “Yes”, and at the top a drop down will open. This is where we select our kit, meaning our tool chain. You should see at least one available called “Playdate Device”, select that.

After the kit has been selected, cmake-tools will invoke CMake to configure the project for us. If everything is working, there should be no errors in the output window (this is a warning popup from VS Code itself but it seems safe to ignore). All we need to do now is to try a build; F7 is a shortcut for CMake Build but it is a task you can run under the command palette using Ctrl+Shift+P. There are also CMake Clean/Rebuild/Configure/etc tasks under the command palette. Anyways, the build should finish pretty quickly and show no errors if everything is setup properly. You should now see a “c_template.pdx” folder in the workspace directory! You can install this using pdutil.exe, via pdutil install c_template.pdx. This could be a task but I’ve been using VS Code as long as I’ve been hammering it to work for Playdate

After all that is said and done, run the CMake Clean task (again, Ctrl+Shift+P and start typing cmake clean and the task should pop up) and open up CMakeLists.txt and change the project name to something other than c_template. Your first C project for Playdate is now setup!

You’d guys be the first ones aside from myself using this, so I’ll try to stick around for questions.

EDIT: updated zip with a fixed arm_patched.cmake file and attached a task to the build hotkey (Ctrl+Shift+B, remember actual Build is on F7!) that will deploy and run the package on the Playdate. For this to work, the workspace folder must be named the same as your project name in CMakeLists.txt

Thanks for your sharing, I have successfully setup the VSCode for Playdate.

I noticed there is something to change, so CMAKE latest version can works and below are documented for better visualization. 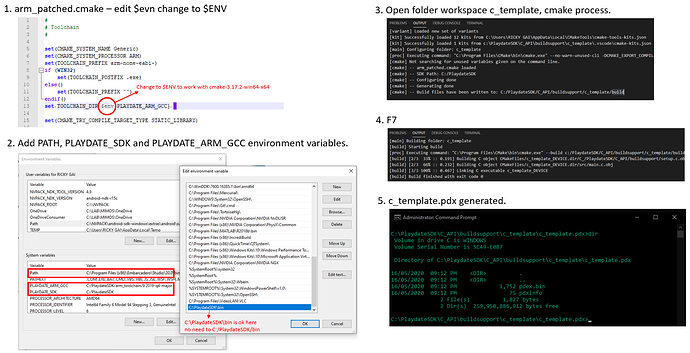 There is no Windows Playdate Emulator or Playdate device available at the moment, the instruction “pdutil install c_template.pdx” screen shot is not available though.

Thanks for catching that! I’ve fixed it and re-uploaded the zip. I also added deploy/run task that is bound to Ctrl+Shift+B (this requires the workspace folder to be the same name as the project).

For more details on pdutil, you can just use a full path to the PDX package. Or are you saying that you cannot run pdutil?

PDUTIL is ok, but the PlaydateSDK 0.10.1 for Windows don’t have the Simulator and personally not yet receive the Playdate device, therefore I cannot test PDUTIL

Is it possible we could get a C++ project template alongside this C template? It seems there’s some nuanced differences between the provided one here and the hello world cpp sample and I’m not versed enough to understand the nuance between what’s needed to make it buildable on windows via VS Code.

My mashed together CMakeList had some weird differences. First being the execution of commands that I assume were put there for mac, so it would throw strange errors trying to configure. I removed those because they seemed to be just for setting up the SDK env variable, and instead I opted for the windows solution provided here. The next weird difference was that the add_executable line was targeting setup.s instead of setup.c. I’m not sure if that’s a typo or if we’re just missing a file or if those bash commands did something to generate that file (though I don’t think they were).

Here’s the CMakeList.txt I put together:

Edit: I should note, the C template worked fine, I got it building, and outputting files as expected. Was even able to run in the mac simulator from a windows build to confirm.

Edit2: After not looking for a day, I decided to check again on my configuration and I figured out I made a mistake in this line

Now I no longer get errors and get an output pdx folder. It still won’t run in the simulator though, so any possible help there would be good. Steps in the right direction though!

Thank you so much, @ali.aya, this was a huge time saver!

Btw, I wasn’t able to get CMake to clean the build directory properly until I changed this line in CMakeLists.txt:

Looks like ADDITIONAL_MAKE_CLEAN_FILES was deprecated in version 3.15 of CMake.

" You should now see a “c_template.pdx” folder in the workspace directory! You can install this using pdutil.exe, via pdutil install c_template.pdx ."

From my understanding it is a c_template.pdx folder and no .pdx file but a .bin file within.

Does it means C compiled version only can deploy to physical Playdate device merely at 0.10.1 SDK ?

Hi Zach and Ali, I am able to compile in C++ successfully and created the .bin file.

However, there is a pop up from CMake tools such as:

Any idea how to resolve this pop up message ?

I believed, for Windows toolchain, only physical playdate device deployment makes sense, based on 0.10.2 SDK at the moment.

HI there! This template works perfectly.

How would one add compiler flags using this environment?

The poom thread has the answer I was looking for.

I am unsure how you able to work perfectly without the warning message below as so far there is no obvious solution after searching the internet ?

From what I understand, to use C/C++ toolchain for Playdate under Windows, there are two options:

Personally, I will decide which is the best method when the Dev Preview Playdate device is received.

Apparently, Panics is responsible for the toolchain and not the developers, building games already time consuming and I really don’t want to spend much time on toolchain though

The Windows Simulator does support loading C API games, although we haven’t published any additional build support / example files for this yet.

It basically comes down to:

Simulator can not load ARM binaries. The DLL must be built using MSVC++ or other Win32 x86 compiler.

hi Brook, thanks for sharing, i did not know .bin is actually a DLL file

I’ve been trying to get the Hello World C sample to run in the Windows simulator. It looks like it’s now expecting the library to be in a file named pdex.dll instead of pdex.bin as Brook mentioned. I’ve built using CLion and VS2019 community, all defaults. I did have to modify the CMake files a little:

I’m now at a place where the windows simulator does try to load this, but immediately fails with the following errors. Any thoughts on next steps? Thanks!