Recommendations for Dithering in C

Context: I've ported my WebGL matrix effect to a Lua Playdate project, and am attempting a C project to see how their performance compares on-device. I'm developing on a Mac.

My Lua project imports a spritesheet of glyphs into an image table, and then creates a cache of opaque faded variants of each glyph on initialization via blendWithImage, to make a lookup table for drawing glyphs at different brightnesses in the update loop: 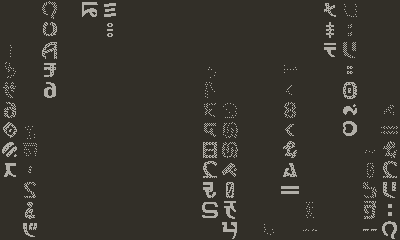 I can think of several strategies for implementing this in C, but I don't know what's possible, or what's best:

What should I be doing here?

Can you create a dithered/faded/graduated black mask in a paint app and draw that over your columns of text?

That way you don't need to do any dithering or fading at all.

This seems to work really well in the Lua version, and now I'm not depending on any API calls that are Lua-specific. Full speed ahead!