Hi I’m SamPlay I already publish a first little demo on the playdate forum of an action rpg little draft game with Pulp.

I only try with safari browser so I gonna try to fix it for chrome ! ps : ahah it's from pulp sorry Shaun good luck

Ski Play is an arcade ski game made with Pulp. It's base on tile scrolling for making a gameplay that make you feel like skiingi. My first idea was to create a game with only one Room for the gameplay.

An itch.io is available with the pdx for free of the version v0.1 (alpha) of skiplay 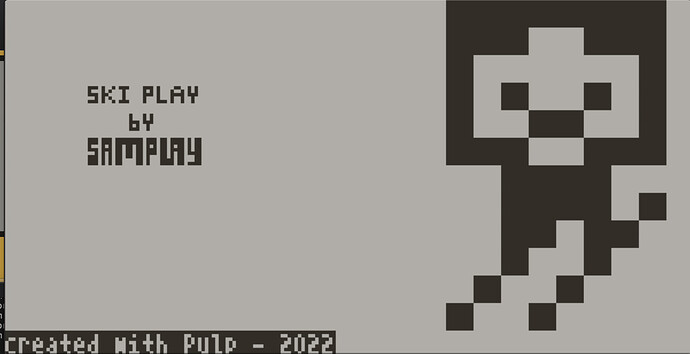 For now I thing the playdate hardware version 0.1 will lag I need too refactor and rethink my saving method… more on that on this post

Impossible the playdate is like powerful as [Unknown-1] for me @shaun Hmmm, I think I need advice for memory gestion so For 120 persona you memorize I didn't wanted to create 120 to memories on the playdate because I thought more about memory then performance I guess a created chunk of string as 0 and 1 that represent encounter of not So I create some kind of algorithm that work for memory reconstruction from string and tile replacement in the room and I bring the new string in memory (I'…

The first version was simple: just get score and time if the time is 0 you lost and the scrolling screen for simulate skiing
here is the first version video with access to the playlist with the advancement of devs

lLter I wanted to add somekind of race within the game to do that I add an opponent and distance relatively from the player
Afterward I done a long play to show in a game if you could play it seem I need equilibration in the gameplay (time you can get so much fast..)

After I wanted to at least test the crank pulp script programming and gameplay so I add a tile jump that make jump the player and a spinning capacity to the player activate with the crank.

Also the player when stopped before this version. also the opponent was stop so I had another engigneclock variable checked at speed 0 so that the opponent still can advance when you’re stop

Latterly I created a topboard room with an algorithm of sorting (Yeah! we do computer science with pulp

Toward I started thinking about the opponent and notion of race. It seem obvious to me that you start last and finish First so I thought about 120 opponent ! (That spoil to check this video)

After that I need to think : 1) save the check of if you encounter and opponent or not in memory like some kind of pokedex. Here I made an error it seem (more on that later. In the post)

I didn’t wanted to create 120 variable in memory for that so a created chunk of string that represents the fact if I had my opponents or not encounter and find way to check that string but it seem to heavy on the sdk so even more in the playdate :s I’ll surely go backward if I want the playdate hardware run the game I guess…
I also needed that the code wasn’t duplicate for each opponent so I conceder use function mimic of pulp script :)…
I also made the music when you ski down and up tempo if you accelerate or not.

But ! The sdk go in we can try the game with it… the load of my memory check algo take around 30second at the start game

Sound sometime are different between sdk emulator and the web player

This project was an adventurous way to play with creativity also do another think with pulp then a story game and create another type of what can be do with Pulp.
I think pulp script is pretty neat.

About the futur development :
Some bug I talk about on the itch page
You can try the laggy pdx ski play v0.1 on itch.io here

(With safari within pulp I can’t download the pdx file)

I wanted this game to run in playdate hardware it’ll be very could if someone could try to see what it make with the playdate
I really love substring function for pulp script ! I thing with those typer of function I’ll don’t need. A big string reconstruction algorithm large.
nor one variable per opponent that would help I think a lot of people…

For gonna continue the game like I said in the itch.io I also wanna create a guide dev pdf for dev tile scrolling game and arcade with pulp

I like to create. A pulp music game and also explore the sdk to see what are the possibility…

If someone try with the playdate hardware I need to know how it work !
I use the sdk on a Mac intel

Small correction done v 0.1.1 (no more crash when your opponent go over -50 of distance)
so that you can play full run after the long load

the V0.1.0 was Ski-play-by-samplay.pdx if you have this version change please !

There is objectif to do to get more point !

The opponent can go more then 50 distance away !

I feel like. the next step is too change all the game so that the scrolling don't lag

What I do Is make all tile go one up per update of position (from the speed of the player)
I feel like I should create on all tile an emit method call "move" that all update of one instead of move all the. tile screen one ahead for that to make it work bittern the. Playdate SDK. and after the playdate hardware I update to the. v0.3 the alpha III !
This one crash rarely and I redo the all tile scrolling system by emit and call a function that move the tile instead of XY looping on tile.
By that the game doesn't lag anymore for any game speed ! It's as playable as. on the web editor !
I remove most of game crash link to position of opponent
I remove some gamelock screen (by pressing a you can go another. room)
I remove I. think most of the visual bug

I share for free all the 120 opponents : there are available on Ski Play by Samplay by samplay

I made them NFT. that you could shake on https://opensea.io/collection/ski-play

I'm. very happy to share this morelike what I had. on the web player but for the SDK I had some futur like hard and. medium mode and other think like a night mode or a snow visual system ! Enjoy the game !
I think next iteration need your feedback because the game need more equilabration

I know there is some ways. to. break the law of my game so I. already think to patch some stuff nextly

I. think in this state it might work on the playdate. if anyone could try